The letter 'J' is next in line.
The official name of this weeks bird is Dark-eyed Junco,
but for this week I will use only the last part of it's name-Junco.
I have included pictures taken by both Jake and me.
Above you can see the different coloration's of the Junco. Even though these birds are considered to be plain looking they have such interesting plumage. 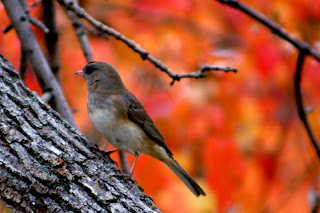 Here is a portrait of the Junco.
In spring their lively twitter is so refreshing. 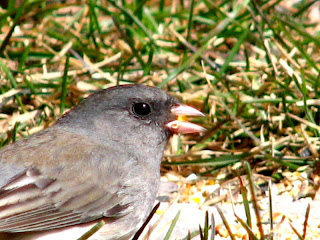 I do believe that the last two pictures show the Oregon sub-species
of the Junco.
If I am wrong I would gladly accept correction. 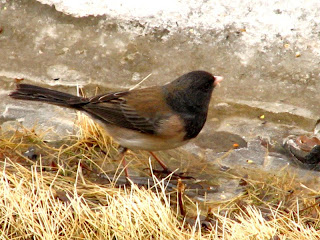 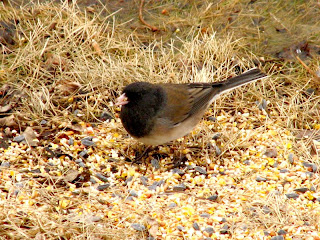 They are wonderful little things - I only have a few left...they've gone back to the mountains.

Ruth your header is just beautiful and I'm really enjoying your shots too.

I Just love the female Junco with the brownish coloring. I only seem to see the male slate colored ones here. You have such a variety. I enjoyed seeing all of them, but I think the first picture was my favorite showing the contrasting colors between the two birds.

Those little Juncos are so cute. We have lots of them too. I've never seen the Oregon one. Quite different. Great images of them Ruth.
B.

They have such the sweetest faces! (I think I say that about all my birds - lol!!) Lovely photos - liked seeing the variations.

I don't know the Juncos so I enjoyed the photos of them.

Ruth, I am so glad that I got to see the Juncos when we were in Arkansas. I'm sure they are gone from there now--since they go north in the spring/summer.

Thanks for sharing!!!
Hugs,
Betsy

Our Juncos have also left for places North. Such sweet little birds. :c)

Lovely juncos! I've been trying to decide if I have some nesting here. They haven't gone away yet. I think they are pretty birds and seldom get a good photo of them.

Thanks for all the great pictures of the Junco. We saw juncos in Arkansas.

You have many beautiful shots of the Juncos. I have several in my backyard as well. I love your blog and your wonderful photography. Thank you for being willing to share.

We still have a few Juncos hanging around the feeder here. They should be gone very soon until next October or so.

Hi Ruth. It was so nice to see the variety you get of juncos. I will verify that the last two photos are definitely the Oregon sub-species of the dark-eyed junco. This is the species (sub-species) we have here in California. In New Mexico I have seen both the pink-sided and more recently the gray-headed races.

Ruth: I would have thought it was a different bird with the color variation. I never saw a Junco untill I took a photo of one and now I see them often.