A Walk Down Memory Lane 9

May I remind you that all the pictures in this series are taken from slide scans,
many of which were taken many years ago.
Today I start with a picture of our Agriculture Research Center located in Morden.
Many roses have been developed here ,as well as other crops. 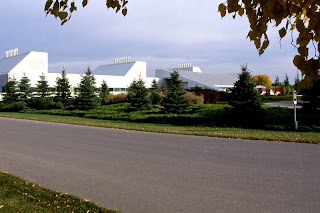 The next two pictures are a tribute to Jake's Dad,he pains takingly built these replicas
of the school house and teachers home in his district.
This school was operational until just a few years ago.
Our son had his first 6 years of education here. 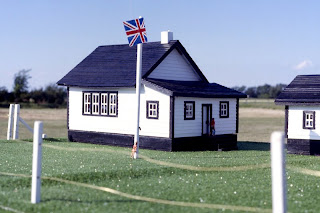 You will notice here the two out houses,yes these were common fare in years gone by.
By the time our son attended here,they had indoor plumbing. 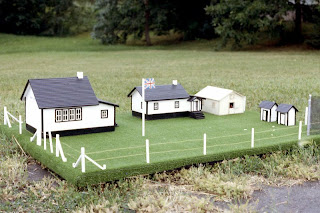 This plane and the car which follows were built by Jake,from kits. 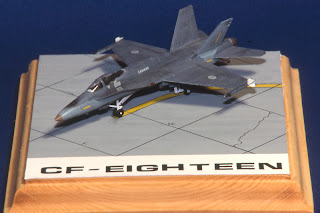 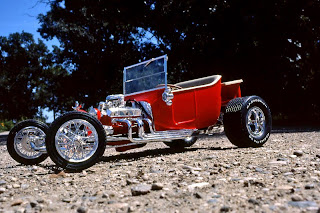 I had to add a few fall scenes,because of the time of year. 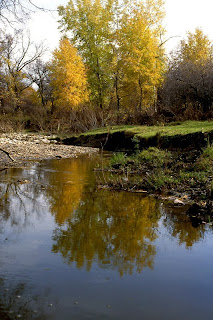 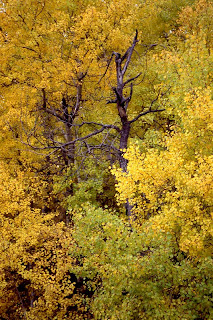 The following three pictures show the huge flocks of geese passing through during migration.
I have to say that I have not seen them in such numbers in along time.
In looking at these pictures,I think they were probably taken in spring. 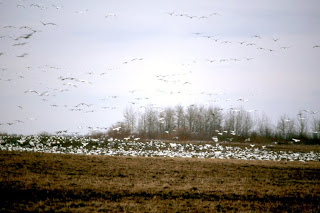 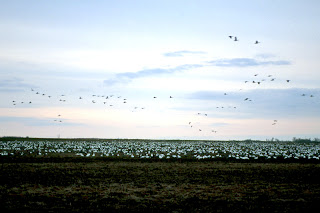 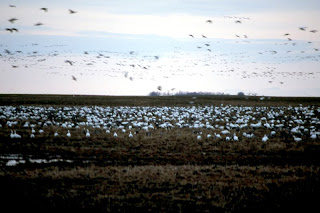 Take a good look at this one.
The B-52 is a massive plane and a pleasure to watch in flight.
This one never has flown,it is another model which Jake built.
A little creative photoshoping,took out the wires on which it was suspended. 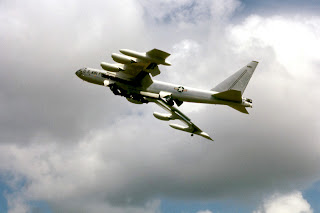 The following are all real planes.
Because I would probably give them the wrong names,just enjoy the show. 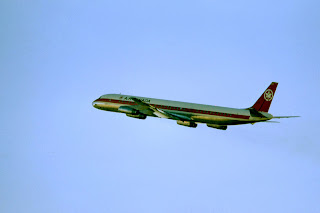 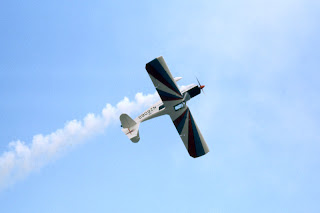 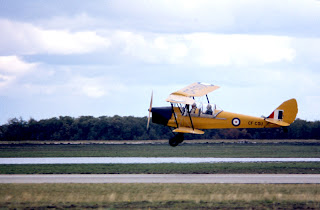 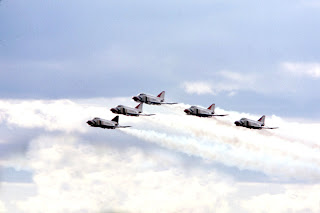 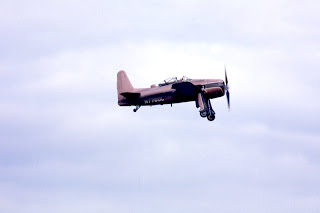 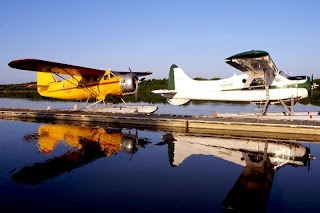 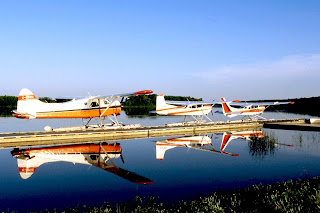 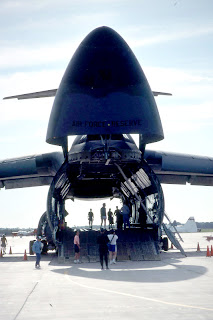 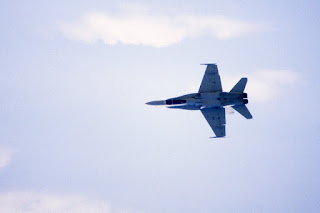 We have spent many hours at air shows and therefore have many photos of the planes. Canada Geese need no explanation. 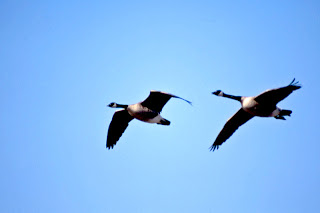 The Western Meadowlark in that perfect light. 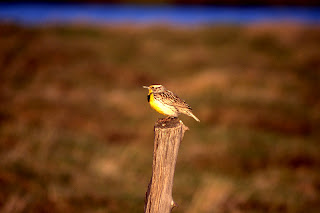 A bull Moose at sunset.
This was taken several miles west of Morden.
We used to see Moose there all the time,but they seem to have disappeared. 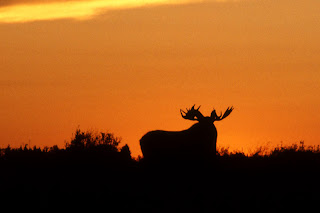 A playful Cottontail Rabbit on our yard. 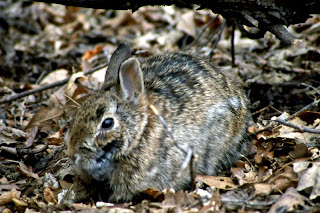 When we lived out in the country the rabbits had become very tame.
If we called them they would come out of the bushes looking for carrots.
Yes,these were wild Cottontails.
In fall when I had a pail of carrots standing on the steps
the rabbit would come and help himself.
I kind of miss those times. 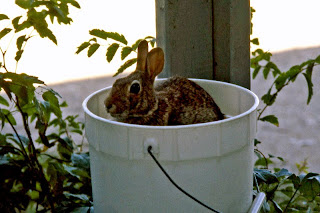 I hope you have enjoyed this set of pictures.
Value the beauty of the changing seasons.
Designed for you by Ruth's Photo Blog at 11:49:00 AM

I love the photos, Ruth. Love seeing the planes AND the replicas. There's just something about planes that make my heart beat faster. The creature photos are wonderful. I love your rabbit sitting in the bucket as well as the flocks of Canadian Geese. What a thrill.

Oh there's so many wonderful things in this post, I don't know where to start, Ruth. First --my family LOVES airplanes. My kids used to make those models.. I love the one where it looked like the real deal (without the wires). Love Air Shows also--and have attended many through the years. My brother used to own and fly a Piper Cub. He took me for a ride once when I was down there in Florida. SO much fun. I used to say that my dream was to learn how to fly... Never did it--and will probably have to wait 'til another lifetime. ha

Wonder if they develop any of 'our' roses in the Ag. Center????? We get new ones every year---that have been developed somewhere...

Your fall colors are getting very pretty. I love all of that YELLOW.

The little school house is so neat. I wish they had have preserved the schools that I attended. They were so neat ---but the powers that be decided to tear them all down and build a shopping center. Darn!!!!

Terrific picture of the geese, the moose, and that cute little rabbit. We had a rabbit in our yard the other night--but didn't get a picture of him.

Have a great day, Ruth. LOVED this post!!!
Hugs,
Betsy

What a variety in this post! Love Air Shows. I have attented many over the years. The models and planes are interesting. I dearly love to see and hear the geese passing thru as they migrate South in the fall! We used to hear them flying over, even at night. They must have been using radar! Sometimes the lights of the town would get them confused and they would come down right in town! Like your Rabbits, too. We are in the country and we see these in our yard quite often. Maybe I should leave some carrots out for them.

There was a surprise with every next picture! The replicas of the school house are such a labor of love! What a great idea! Loved the plane that you photo-shopped! Could have fooled me, lol! LOVE the golden fall leaves - beautiful reflection!! Great post! Enjoyed my visit!

Ruth: You gave us a great series of photos on so many sujects. I loved the model of the scool and the car the best.

Ruth,
Such a variety of photos in your memory lane today...how cute is that little rabbit in your carrot pail! Loved all the planes and especially the little models..had me fooled with the photoshop image..lol! Your fall shots are lovely...our trees have not started to turn colors yet..soon tho as this cold front moves in tonight!

Lots and lots of nice photos. Love the airplane reflection shots. Love the moose at sunset or sunrise (not sure which). Love the color of the sky with it's silhouette.

Wow...I get so intent on all the great photos and info and then when I'm ready to comment forget what I wanted to say! Jake's dad did a wonderful job on those models! Those buildings are so detailed. I sure thought the plane was real and not a model. YOu took some great airplane shots. Love the bunny in the pail...my favorite. I

Those miniatures are really nice work. I like the photos too.

I enjoyed this 'walk down memory lane' very much. The pictures are wonderful. Such a cute one of the rabbit in the pail. I seem to have heard of the Morden Agricultural Research Center....I think from various seed catalogues. Very nice post, Ruth.

First let me say thanks so much for your encouragement over at my site. It was nice to hear that your 36 year old still needs mom. Sometimes I think Old One can't wait to be gone, Although the last couple days have been good, And even though I told him how our insurance would go up when we add him to our policy, he was genuinely concerned yesterday when he found out how much. I guess I just worry that my boys will be like my brother was with my mom. All about him all of the time. Never really there for her.

But I know to leave that all in God's hands and to continue to pray that my sons will realize the need for their own faith, to grow in their knowledge of the One who really matters.

Lots of memories in your photos for me, As I was growing up, every year we went to the air shows at the big airport in Niagara Falls. Lots of good memories!

Indeed I enjoyed each and every one Ruth! I love bunnies, but the Coyotes have taken almost all of them around here.
Love your new header.
B.