A Walk Down Memory Lane 17

For today's walk I have chosen  birds of a different sort.

Turn your eyes to the sky and be prepared for some noisy flight.

May I remind you that these are old pictures that have been scanned to the computer,

therefore the quality may be somewhat inferior.

We start off with the impressive US Air Force Thunderbird team flying their F4 Phantoms.. 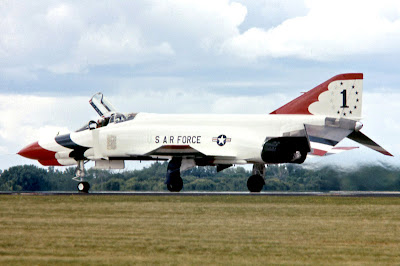 This team of pilots put on a phenomenal show.

If you have never seen them,make it a point to do so. 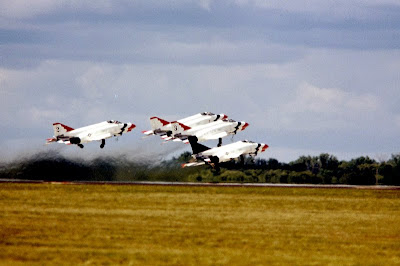 The precision flying is like a fast moving ballet. 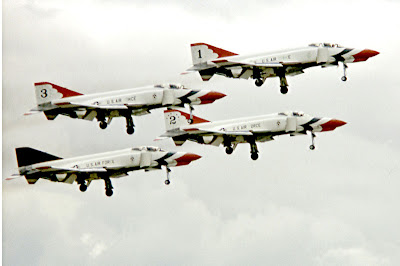 Some people are more daring than others.

I can never figure out why a person would want to stand on the wing of  flying aircraft. 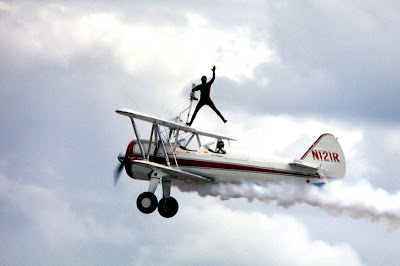 Here the C130 Hercules is doing a JATO.(Jet Assisted Take Off)

We had the privilege of seeing this at the Abbotsford Airshow in BC. in 1973.
This type of take off is designed for short runways.They can lift-off in a very short distance. 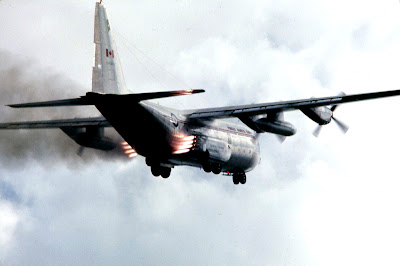 This was also at the Abbotsford Airshow.

The British Vulcan Bomber made a pass together with a Tudor Jet. 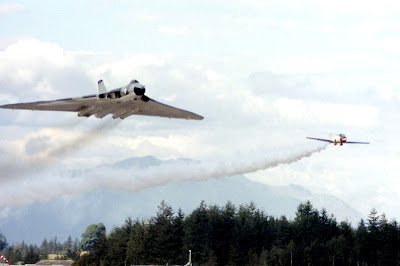 Another shot of the Vulcan.

This is quite an impressive plane. 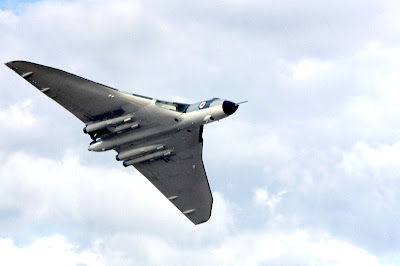 Here is the same plane which the Thunderbirds used,the F4 Phantom in military colors. 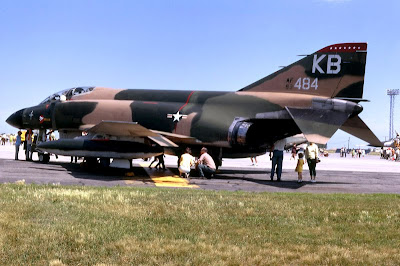 The US B2 Stealth Bomber,making a pass in Winnipeg. 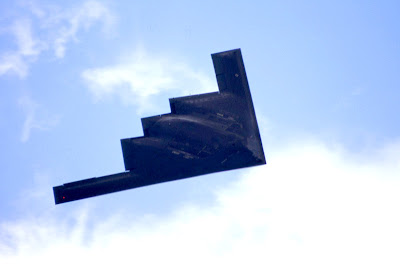 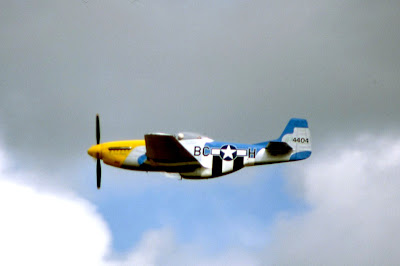 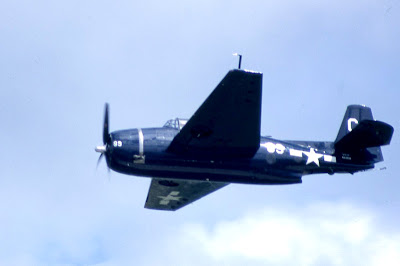 This scene is much calmer than some of the previous ones.

This is taken north of Winnipeg,float planes safely docked. 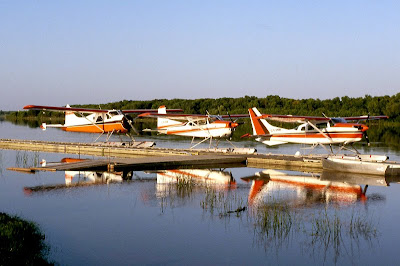 The F117 Stealth on display at Grand Forks Airbase. 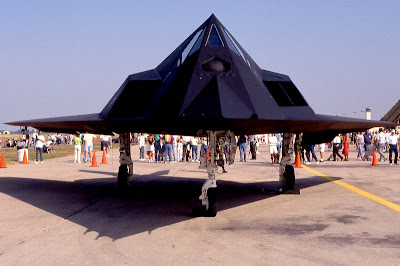 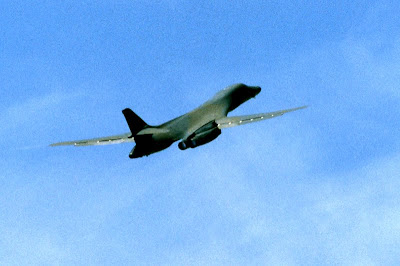 The following two are WW2 airplanes. 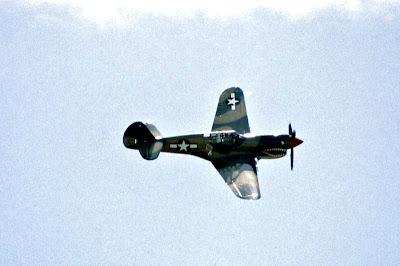 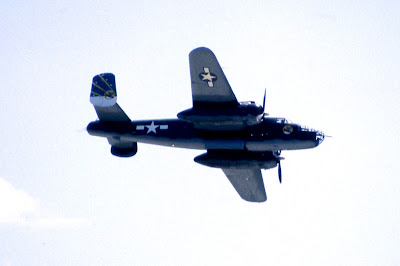 F117 Stealth on another flyby. 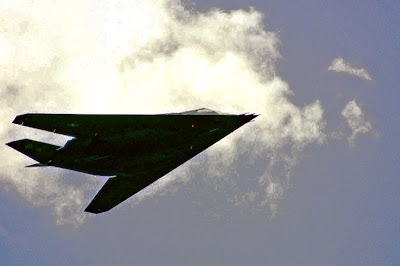 A view of the underside of the B1 Bomber. 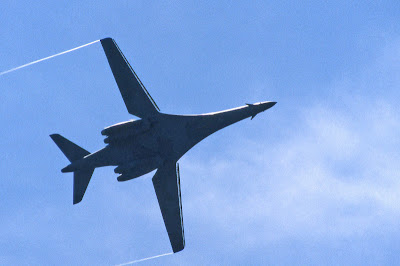 The Canadian flying team the Snowbirds is a treat to watch.

Their planes may be smaller than those used by the US flying teams,

but their skills are just as good. 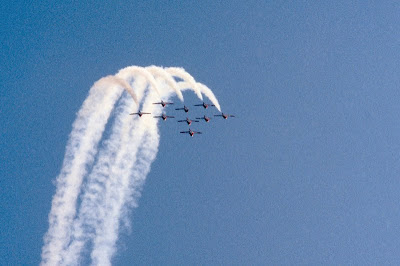 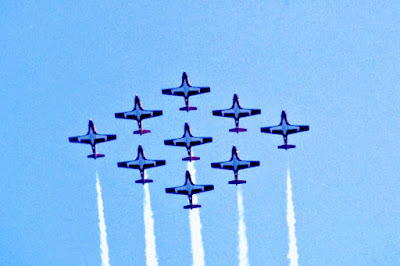 An F16 displaying it's missile. 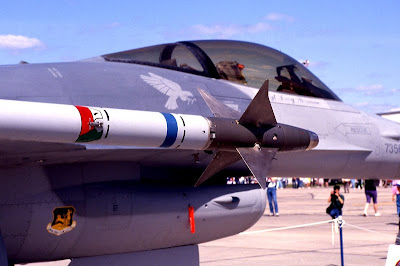 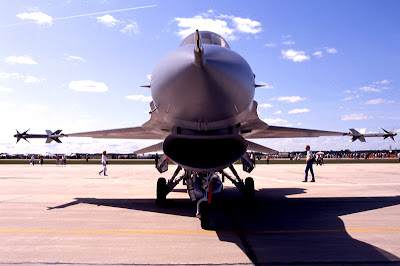 A British Tornado on display at yet another airshow. 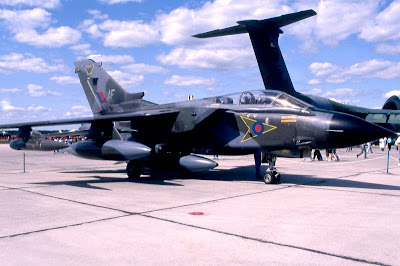 A C130 and two F18s doing a simulated mid-air refueling. 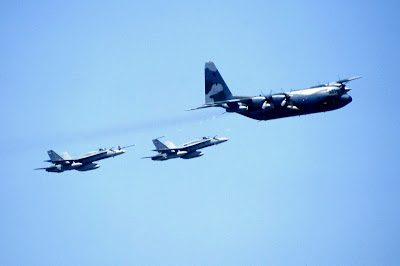 This C130 was taken at our small airfield near Morden.

The plane was taking part in a training exercise. 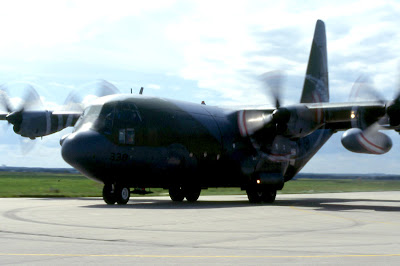 The US Navy Blue Angels is another team worth seeing.

I love the power of the planes,but it is the skill of the pilots which is really on display. 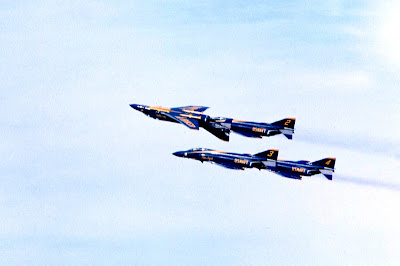 This skydiving team is carrying our Canadian flag,The Maple Leaf. 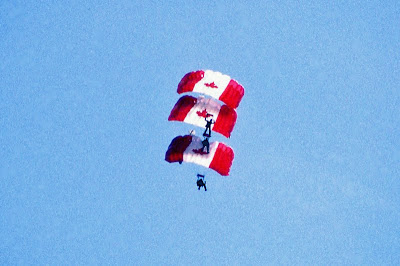 in a part of the world where the two neighboring countries are friends.

Nice precision flying and great display of different aircraft.
Must have been a great show to watch.

Ruth: Wonderful photos of the air show. You got some great shots of all the action.

Jeeze Ruth, This post looks like you, also, live by following the airshow circuit. Lol!! My camera starts to cry when we drag it to an airshow..nooooo not another airplane!! ha ha.
Your photos are wonderful and you've captured some really nice shots of a few planes I have never seen before.
Wonderful post!!

Ruth, this is a really nice post on Aviation. We used to go to air shows when they were close enough for us to drive to them. Very nice!

And how nice to be living in a time of history when it is so easy to chat and connect with folks living on either side of those country lines!

Your photos brought back lots of memories of going to air shows with my folks and seeing all of those planes and daring pilots and the amazing feats they are able to accomplish.

I like your new header with the ice on the windshield shots! Very nice!

LOVE your new header! Just beautiful! Wish I knew how to do that...lol! Totally amazing collection of those wonderful flying machines!!

These are wonderful pictures of the 'warbirds'! I had the pleasure of seeing the Blue Angels in person and I agree it is quite a show.

Excellant shots Ruth. Almost like being there, but so much quieter. LOL Love your new header.
B.

I always love to see pictures of the planes. It's even better when you can hear them, they're so powerful and nothing else in the world sounds like that. I'm still amazed that they can get off the GROUND!

Hi Ruth, I LOVE seeing all of the airplanes. I think I told you that my brother loved airplanes. He learned to fly and bought himself a Piper Cub.. I got to ride with him in it. LOVED it.

I've also been to several Airshows--and love them... Thanks for sharing.
Hugs,
Betsy

What an excellent collection of pictures of man made "birds". I saw a plane crash at the CNE in Toronto in the 1970s and never went to another air show again. But I know that is an unusual occurrence. I like your new header.

I love to watch air shows! Your Snowbirds have flown here for our Freedom Festival and they are very impressive. I have some nice photos of them, too. Of course our Blue Angles have been here too and both are wonderful. Will show Mike the other photos...he loves planes and we are always going to Air Museums scattered across the country.

Lots of great photos of some pretty amazing planes and pilots. You certainly can display with pride!

I have only been to one air show a long time ago, but looks like you love them.

I must say your new header inspires me to get busy and make one up for winter. It's just beautiful and inspirational as well. Thank you for posting on my blog..You are always full of kind words. Blessings to you!

I have a slide of a passenger jet landing with a man standing on its roof. Nobody believes I didn't doctor it.

John 1:1 is one of the coolest verses in the Bible (though I do prefer the King James version).

I wish you can post more from Winnipeg Air Show.
I have been there many time, however, all pics are lost.