Let me introduce you to my family.Well,sort of.
I have only one sister,we were born seven years apart.
We both got married and had one son.
Becky,my sister,lost her husband 14 years ago,and as most of you know I said a final good-bye to my husband last year in November.Both our sons got married,both have one daughter.These two girls are 6 months apart.
I have said all this to introduce the next two pictures.
Becky and I,together with our Granddaughters spent a day together a few weeks ago.
I caught the girls playing on the chair.
The girls,Kai and Addy ,were very willing to help me bake French Bread.
These were their creations.In the foreground is Kai's butterfly and in the back is Addy's teddy bear.Addy had some help from Grandma to form the bear.
I might add that Kai ,who is the older one,took the picture.
It also helps that her Daddy is a photographer.
We had a great time,making memories. 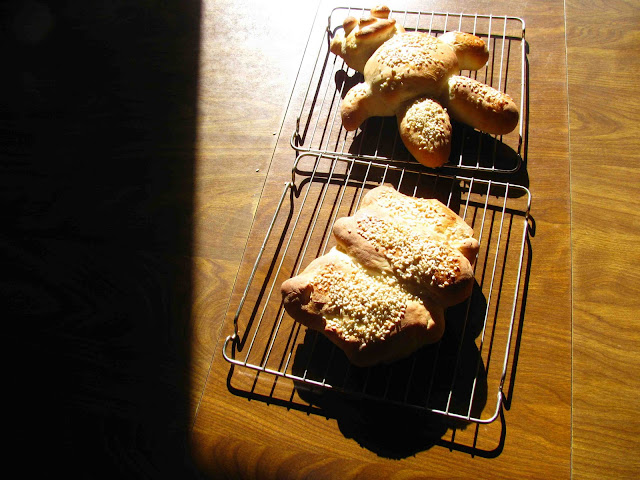 Now on to the second part of my title,the birds.
Spring migration has started at the Pembina Valley,here in Manitoba.
I have only been there once this year and on that day the birds were absent.The following pictures were all taken on March 17,2010,by Jake.
This is a taste of what it is like on  a good day at the Hawkwatch.