As the title of this post says,I have been playing.
Playing in Photoshop,to be exact.
Seeing that I don't have as many photo opportunities in winter,I thought I would try my hand at being creative.
all of these pictures were created by using Actions and a Filter.

The first one is simply a double frame added to the picture. I did go in a tweak the colours to my liking.I thought the addition of a gradient added to the whole look. 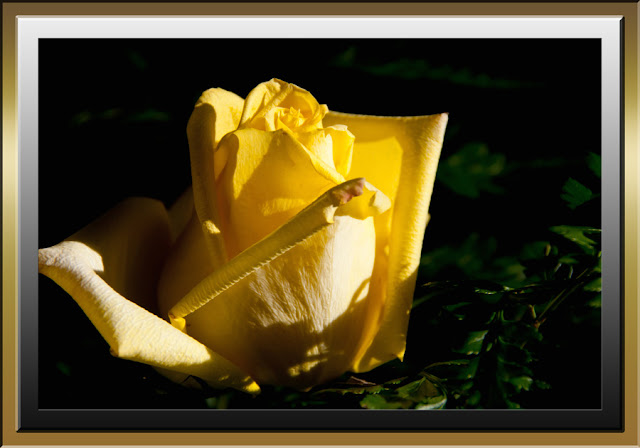 Here is a simple weed which I found in my wanderings. The snow cap looks nice on it.In this picture I added a filter called Plastic Wrap.Again I adjusted the sliders to achieve what was pleasing to my eye. 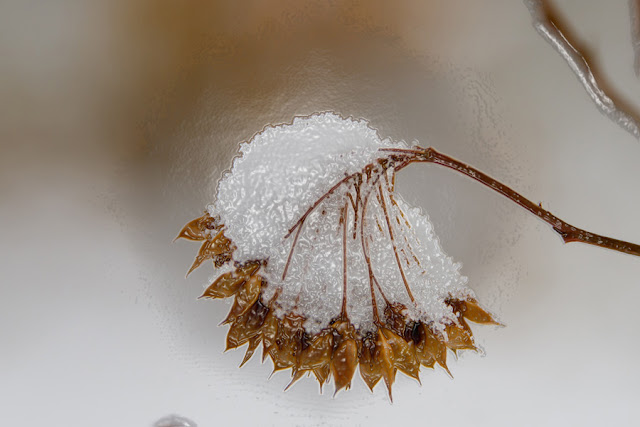 Here is the original picture,just for comparison.

Here I used an Action which creates the reflection for me.
It is so simple to use these,just choose an image and a desired effect and hit the Play button. 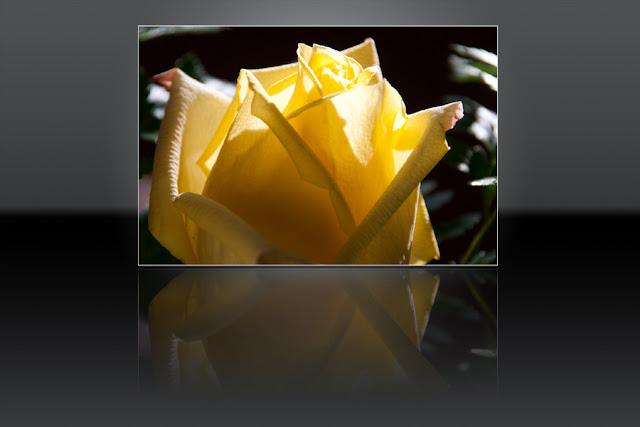 I found some free Actions on the internet and downloaded this one as well as the Refection one.
The image speaks for itself,but it is called a Snow Globe Action.
I imagine that any picture would look good in this,but today I was in the mood for flowers. 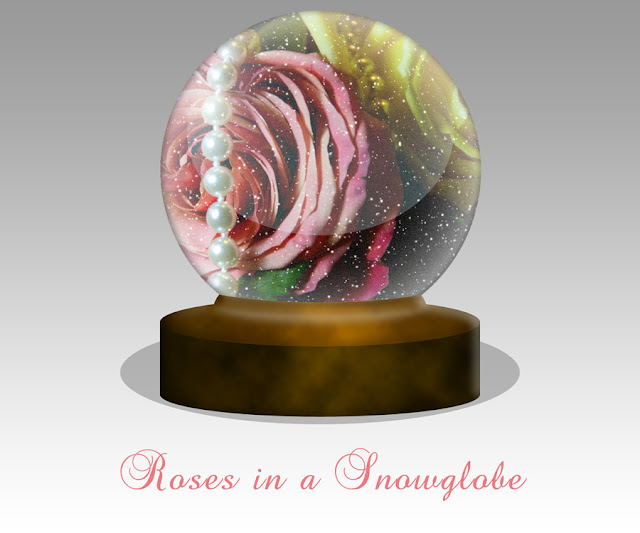 Thought for Today:
God has not promised to keep us from life's storms,
But He will keep us through them.

Excellent photos, im glad to see im not the only one here who like to have a play on photoshop. You can surprise yourself sometimes on what you can achieve.

I love your effects Ruth. Photoshop would be so much fun. The snowglobe is neat, too. Diane

A Garden of Threads said...

Wow Ruth these are fantastic!! Where did you get the reflection action? Jen.

i so wanted these actions, i tried to download them a few days ago, the reflection and snow globe and my PS is to old. My friend Rich and i downloaded them on his computer today so he can play with them. I love that first rose, it looks so real, like i could reach in and grab hold of the curl and feel it. you did great with your play time, keep playing and posting. love them all

i've never tried photoshop, but i know it can do some marvelous things. i really like the snow-covered weed that you adjusted w/ 'plastic wrap'. :)

You know your editing!!! To use these, you have to know what kind of effect you want and be rather artistic, else you would create something that didn't look good. You are right on the money with these, I wouldn't have a clue, I am so NOT artistic!! My favorites are the two yellow roses. I must say though that the weed with the snow on it, I like the original picture better than the edited one!

That first picture of the yellow rose is breath taking.

Very nice. I don't have Photoshop. I have Paint Shop Pro. I don't know which is the best, but I used to mess around with my PSP a lot back before Ben passed away. After he died, I lost interest in a lot of things.

I like what you have done with these. Your photography is always spot on no matter what!

Love what you've done with these!

A fun way to pass a winter day :-) I love that plastic wrap effect...neat!

Good job! It IS fun to play with pictures sometimes!

Just love that you are enjoying playing with photoshop! So much to learn out there! Gorgeous flowers and I love those seed pods with the snow!! Bless you!

That's pretty cool. I like the plastic wrap on the weed.

Oh, very nice! It's fun to do a little experimenting.

Too cool! You inspire me. I need to start playing around with my software. I think you start with better photos, though! Your photos are awesome.
Kay

Gorgeous shots, Ruth...Glad you are enjoying Photoshop. I like my Photoshop Elements 10 also...

Thanks for sharing your creativity.
Hugs,
Betsy

it's amazing what you do ruth, you do so much "fun" stuff that would not even dream of trying!!

love the header, two flowers in the sea, you and jake!!

Great photos Ruth.
I am having a difficult time understanding Photoshop. Still trying though.

Thank goodness that our God still calms the storms...
hugs.

I really like what you have done with your Filters and Actions. I really need to find the time to do some of these things.

Some nice results from your "playing around". Have a great weekend, Ruth. Mickie ;)

Have a wonderful weekend.

I think you did a great job. Since Picnik is shutting down, I'm resigned to learn PS Elements. I just purchased my copy last night. I love the snow on the weed post processing. It's lovely. Hope you have a nice weekend.

Besutiful work Ruth. I admire you for what you do with the photo's. Have a nice weekend

Wonderful work with these photos, Ruth - marvellous what the digital age allows us to do to see things differently. Enjoy your weekend.

Very creative, Ruth. I love how one never runs out of things to learn in Photoshop.

It is obvious you have become an expert with your camera. All your work is mind boggling.

These are very cool effects, Ruth. I like all of them. I don't know if my PhotoShop Elements 7 has a button called "Play" or a snow globe effect. I'll have to check that out.

I like your original photos very much but also, you have got great Photoshop effects. Well done job, indeed!

I can't pick a favorite...no way because they are all gorgeous. I love what you did for your header....wish I had thought of that. :)