I had the pleasure of spending some time at one of my favourite photography spots,St.Vital Park in Winnipeg.I have taken countless pictures at this park over the last several years,but I always find more to photograph each time I go there.

Ring-billed Gulls are willing to get their picture taken,especially when you throw out some sort of food.
In this picture I liked the green and red reflection behind the gull. I have no idea what this was,as I didn't notice it until the picture was on the computer.

This gull had just landed and I caught him with the wings still slightly raised.
I was taking pictures of the gulls,but I am always drawn to the way the water looks on each picture.Often this is something I don't see until I have the picture on the computer.

This Canada Goose is on final approach for a landing.I liked how the body is stretched out to make that perfect touch-down.

And we have touch-down.He seems to be sliding on the water.It all looks so effortless.
The action is so fast that I have a hard time keeping up with it.


The one thing I can be sure about is that if I didn't get the right shot this time,the birds will be there again the next time and I can keep on trying.This is just one more reason to get out there again.

Thought for today:
I love to think of nature as an unlimited broadcasting station, through which God speaks to us every hour, if we will only tune in.
George Washington Carver
Posted by Ruth Hiebert at April 17, 2012

Great shots, so much action and detail!

Ruth, these are wonderful action shots! I too like the water action when birds are landing or taking off. It's always exciting to come home from a photo shoot and put the photos up on your computer. You never know what surprises you will see, all the while you're hoping you caught the action you wanted.

Incredible shots, Ruth. The gull taking off and the goose landing are just amazing. Well done.

That is an excellent quote by GWCarver! Our heavenly Father puts on this show for our pleasure - totally blown away by that! And to think you've captured this so beautifully so that the rest of us can enjoy it and praise HIM! Love it! Thanks Ruth!

you kept up with it wonderfully! i really, really like that 2nd shot.

Hi Ruth, Absolutely gorgeous photos of the water birds... I can never get my birds in flight --and you captured the gulls and Canada Goose really perfectly.. Thanks for sharing.
Hugs,
Betsy

These are all great shots Ruth. It takes a lot of patience and timing to get such good ones. Diane

It is extremely hard to get in flight shots like this, I haven't done it yet, and not for lack of trying. You make it seem so beautiful and easy!

what beautiful shots,ruth!!
i love them all.
thanks for taking us along.

wish you a great day!

FABULOUS shots, Ruth. I love to capture the movement of water, too, but I'm not very good at it. These are great shots.

i have intended each time I come here to tell you how beautiful your new header is, but by the time i browse the new photos i get caught up in the beauty and forget. so now i am telling you. these are all totally awesome photos. you grabbed that action and freezed it. that quote is os true. keep snapping, love your birds.

Congrats on your POTW. It does amaze me how geese can even take off!

Hi Ruth...Love the first with the color glow ,abut there all great shots....I also love your thought for the day..so true!!!
Grace

Out on the prairie said...

You always have such great shots to share.I too enjoy seeing additional images once you review the shots.One day I was shooting pelicans and had a fox watching from across thw water I never saw since i was always watching the birds so close.

It is fun to take time to look at the water as well. The wings amaze me - great job with both the birds and the water!

Wonderfully beautiful photographs of water and birds! I also really like that GWC quote.
Congratulations on your POTW!

Ruth: You do such a wonderful work in capturing your birds. Thanks so much for sharing those beauties.

These are poetry in motion ... just beautiful.

These are marvelous photos. I really like the way you've captured the take-offs and landings. These pictures are really works of art.

the "clicking at the right moment" gods where with you ;)))

Congrats: your photos are excellent!
LOVE IT HERE!

two of my favorites - gulls and geese!
it's so hard to capture them in flight and you have done that flawlessly
congrats on POTW

Those are wonderful pictures! I have yet to take a bird-in-flight picture worth posting.

Ruth, these are amazing shots...I like you love the action in the water from the various positions.....Such beautiful birds.....

Ruth, you an excellent job with your camera. These are all great shots of the geese.

I never knew seagulls could look so good - these are awesome captures, Ruth.

Have a very nice weekend.

Great bird captures! I find a moving target hard to keep in focus. Love your quote, so true.

I like how the gulls and Canada goose put on a show for you!

I love your flight shots and the quote!

Ruth, what wonderful snapshots a what a nice way of framing them. You're right, the water is part of the scenes and often enhances them.

Wow...you really show your skill in these shots! I love the gull and goose shots for their motion and beauty both. Really beautiful, Ruth!

Wonderful pictures, Ruth. I especially liked the first two gull shots. You captured such beauty in the wings.

It is no secret that I enjoy going to Lake Minniwasta at sunset, so today I share another one of those evenings with you. The light was alre... 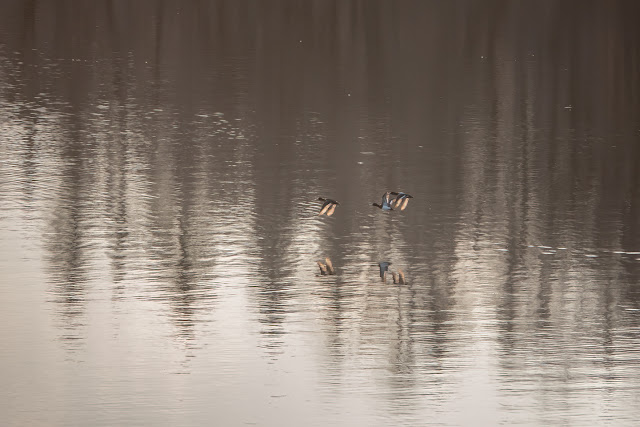