And So It Begins

The annual hawk watch at the Pembina Valley actually began about the middle of February,but it was a slow start.March 30th was the first day I went to the valley to observe. I wish I could say that the birds came through in record numbers,but that was not the case.
It was great to re-connect with friends who I see only at the Hawkwatch,as a rule.The weather was wonderful,warm sunshine and just a little wind.

The highlight of the day,other than meeting friends was a Golden Eagle which flew by close and low.
I had only had pictures of the Golden Eagle from far away up to this point.

Of course no post about the Hawkwatch would be complete without a Bald Eagle picture. 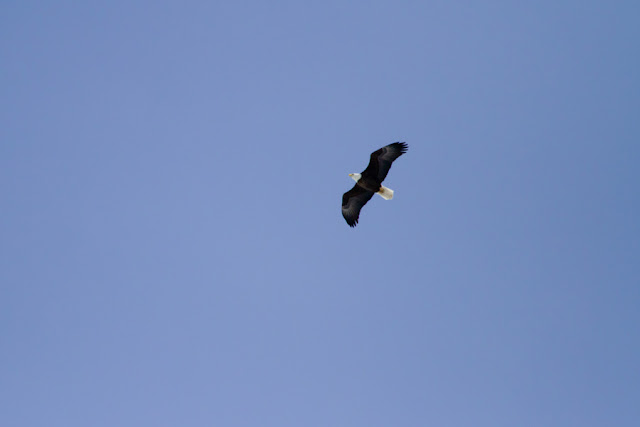 I look forward to many more trips to the valley before the migration comes to an end around the latter part of April. Once I got to the valley on Saturday,I realized again how much I enjoy the company of the other birders and also just being there to witness this with my own eyes and my camera's lens.
Designed for you by Ruth Hiebert at 9:02:00 PM

I never get tired of seeing the eagles, and I love the Black Billed Magpie, how pretty they are from that view. I'm glad you have a chance to get together with the birders again. Diane

any of these 3 would thrill me! that magpie looks awesome in flight!

Of course, it's always a thrill to see an eagle, whether bald or golden; but I think magpies are stunningly beautiful birds. You caught a great picture of this one in flight.

The magpie and the eagle are both awesome, but I really like the magpie better! We don't have any around here, and he looks just spectacular in flight!!

Wow---as much as I love Eagles, the Magpie wins tonight's photo I think!!!! Wow--what a beautiful bird in flight.... I'm impressed.

Hope you get to go back for more photos to share.

That magpie shot is so incredibly AWESOME! So are the other shots, but that one is something special. Great job!!

I think it is the company of the other birders that makes me love birding so much also!! And getting out in nature...Glad to see you are out with your new camera...lovely! cheers Nora

Three lovely birds in flight. It's such a thrill to see any raptor but you always seem to see the best of them. Keep on snapping. I look forward to more.

Hooray! I know this is something you've been looking forward to. Great flight shots!

The Black billed Magpie shot is just gorgeous! Glad you got out to the Hawk Watch.

These are wonderful Ruth. How exciting to be a part of this and to capture a few of God's flying creatures doing what they were created to do, FLY.

what a fun time with your birder friends. i would like to find a couple of people who like to take the same things i do, inanimate objects, buildings... it no fun to go shooting alone for me.

You got some great pictures. We have "big" birds that come back around here in March, but they are usually Turkey Buzzards. They can't quite compare with what you've seen, but I do love watching them soar on the breezes.

I hope this is just the first of many posts about the hawk watch. Your photos are marvelous. I really like the magpie picture.

Wow Ruth, to be able tyo see all these big birds must be wonderful. Great shots too. Have a nice week.

Great pictures, especially the Magpie! We don't have those here.
Have a great new week!

Ruth, how exciting! Glad things are finally on the move!

What a great shot of the Magpie!

This sounds like it was a lot of fun! I enjoy seeing the pictures with the wings all spread out and the birds soaring.
so pretty.

I haven't seen a magpie since we moved from Alberta 10 years ago - lovely, as are your other shots.

I would love to see a Black-billed Magpie...what stunning contrast!

What fun. Our hawk watch is in Duluth where thousands of raptors stream by a ridge overlooking the bird "funnel" at the tip of Lake Superior...:)

I like seeing your bird photos...birds fascinate me the way they fly so elegantly

I haven't been to a hawk watch since last fall so I'm a tad jealous. I may not get to one for another three weeks! The raptors have been late here too. I hear the traffic is about to pick up, though. I also like the company of other birders. :)

Wonderful shot of the eagle and magpie!

oh ruth, how exciting!! you got some great pictures!!

I always enjoy your photos of birds flying above with the beautiful blue sky as background. Stunning shots of the magpie and the golden eagle, Ruth.

Oops...I was signed in under my husband's name when I made the comment above (Grandpa VanderBeek).

I always enjoy your photos of birds flying above with the beautiful blue sky as background. Stunning shots of the magpie and the golden eagle, Ruth.