This past weekend we had a lot of rain.I have heard reports of anywhere from 2-8 inches.
Considering that this came shortly after the spring thaw,the ground was not that dry yet and so we saw a lot of water.

I had to get a picture of this.Some of you may have already seen this on my Facebook page,but it is worth a second look.Two Baltimore Orioles took shelter under the railing of my deck.They sat there for quite some time. You can see by the raindrops on the window that is was raining hard. 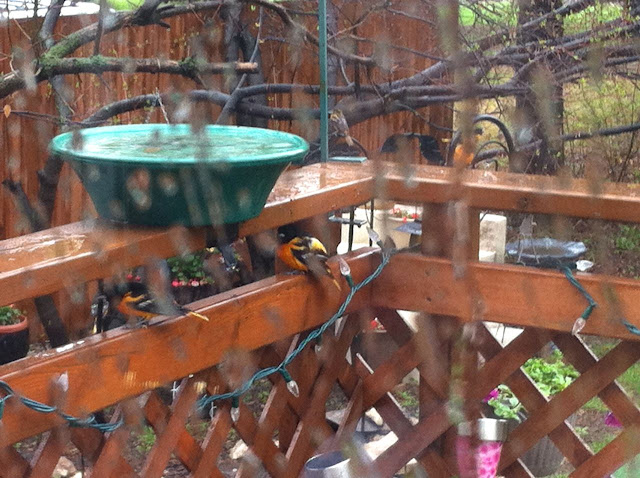 This is a picture from just a few miles north of Morden.The little creek is usually no more than a trickle and often has no water in it at all. Plenty of water rushing along here at this time. 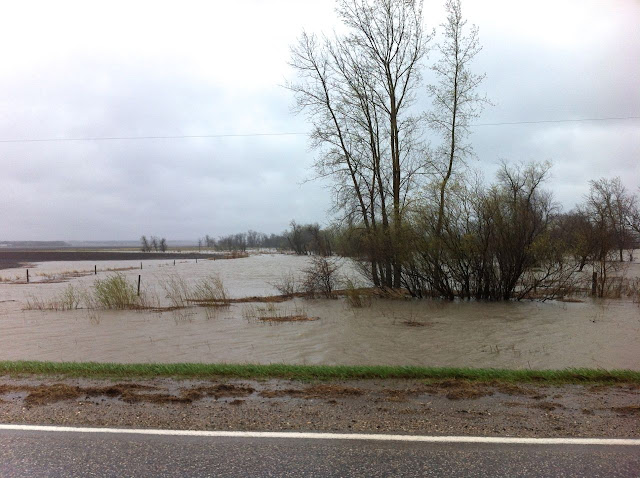 The lake which supplies our town with most of its water,spills out into what is referred to as the Dead Horse Creek.Don't ask me where that name came from,but that is what it is. All of last summer this creek had only a little standing water in it,which meant that our lake never filled up properly.This picture is from Monday evening and the creek is at the top of its banks. At a few places it spilled over,resulting in some streets being closed. 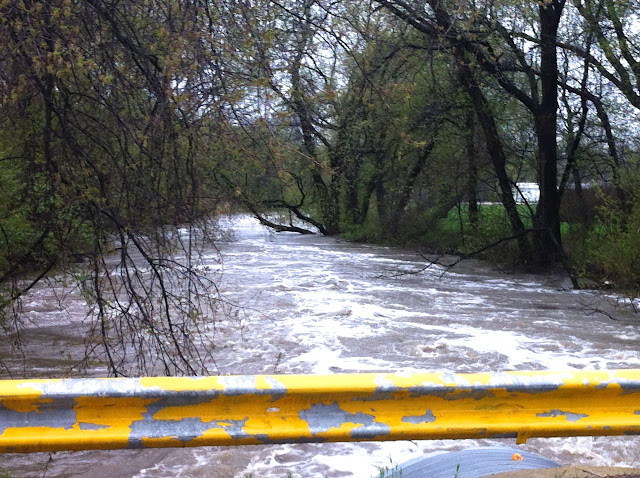 By Tuesday morning most of the rain was over,but the Snapdragons which are waiting to be planted,still had some lovely raindrops on them.
This leaf almost looks like the head of a small lizard. 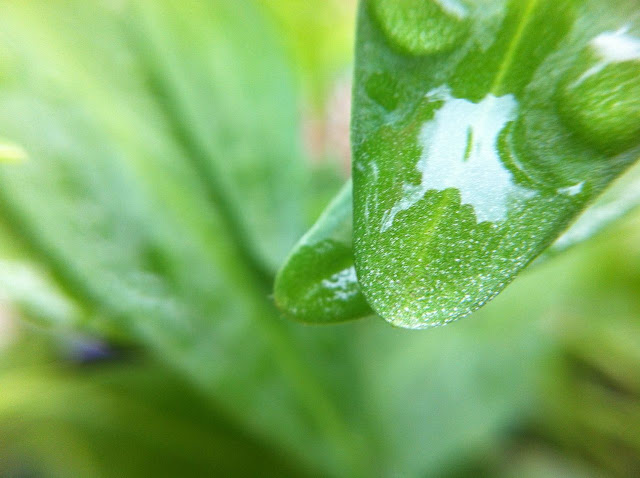 Here is a macro of one of the flowers,or at least part of a flower.I like the colour and the droplets add a nice touch. 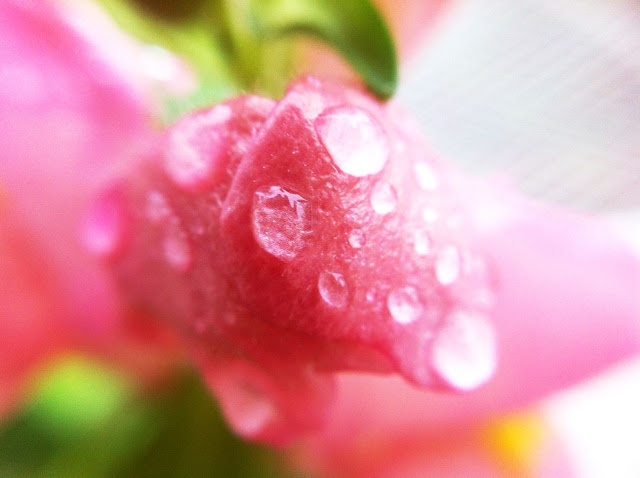 The forecast is for near freezing temperatures for tonight,so my flowers are all safely covered with blankets.

I know that losing a few plants is minor compared to the losses in Oklahoma.My heart goes out to those people and I pray that they will find strength to endure.

A Garden of Threads said...

We have also had more flooding from heavy thunderstorms and more to come tomorrow. Wishing you well.

Prayers for Oklahoma --but I hope you don't lose any plants either...

We've had tons of rain also --all spring long... But--hopefully we won't have anymore cold temps for a long time!!!!

Oh gosh I hope the rain has stopped there and you do not get a freeze. I like the hiding birds on the deck!

That looks like a lot of rain. I hope we get some soon.

Oh, the poor Baltimore Orioles. They look miserable, as they hide under your deck railing. But what a treat to see them. The flooding looks bad. There's such a fine balance between flood and drought. Hope your part of the world finds that balance soon.

Is there a better feeling than giving shelter? That's a heartwarming picture of the birds finding shelter on your deck. High water or no water it seems like. I feel the same as you - those pore people and the creatures!! Diane

Ruth, Love the Baltimore Orioles...seeking shelter on your deck.
Sigh...we also have been flooded with an abundance of rain. Hard to complain since we have been in a drought for over 5 years. Sigh....

I like the photo of the Orioles seeking shelter. Hopefully your rain will end soon with no more flooding!

Tonight is supposed to be above freezing here and warm temps the rest of the week. June 1 is normally considered our safe planting date, but I'm not sure I trust that this year. We're going to go right from snow to fire season. It's always very dry after the snow has melted, and no rain in the forecast. Seeing the terrible photos of Oklahoma puts everything in perspective though. Cold weather is nothing compared to that horrible tornado.

The orioles are so colorful! I have never seen a real one.I love the rising creek shot with the chipped paint yellow guard rail across, it makes a surprisingly artful picture! Perhaps the rail is to stop any dead horses from floating any further downstream...

Oh I LOVE your Macro shots Ruth!!! We had a lot of rain last week and last weekend too.... but this week has been sunny so far :)

Me thinks you need some sunshine. Soon!!!

Hi Ruth, Weve had our fair share of flooding here in the Midwest with the Rock River and Mississippi River last month.

For the very first time I had orioles a couple of weeks ago! They were getting on my hummingbird feeders. So I put out oranges and grape jelly. They were here for about a week. And I even bought a nectar feeder, hoping they would come back, but they are gone now :(

Overflowing creeks and rivers is scary. We had about that much rain too Monday, with flooded streets.

I hope you don't lose any plants from this latest freeze.

My heart goes out to all of those in Oklahoma who have lost so much.

I like the second picture a lot. It reminds me of how it gets around here in spring.

we lived on the bank of a creek like this one and every year it would flood like this when the snow melted. we are in the 90's here. i love that first shot of the birds taking shelter

Now I know why I haven't seen any Baltimore Orioles this Spring--they headed further North to you!

Most of the heavy rains this week missed us. We had a very light one this morning.

I actually thought that you had a picture of a lizard there. It does so much look like one. Wow...that is a lot of water...lots of rain! Cute how the little birds found them a small space to get out of the rain..
have a good day Ruth...
shug

i hope everyone stays safe in the high waters. your photos brought back memories when i was a girl in wisconsin and mill creek would overflow and flood the fields.

the orioles are so cute (and smart) and the 'lizard' leaf is cute!

The orioles are so sweet taking shelter on your deck. And that leaf does look like a lizard's head! Can't believe the amount of water you guys received. Hope the weather settles down soon. God bless all those people in Oklahoma.

Hi Ruth...Yes I did see the Orioles on facebook, but certainly worth seeing again so smart they are, a great shot!!
Looks like you do have some high waters ..I often wonder about how things get there names : )
The leave does look like a lizard..how clever you are!!
When it rain you just go along with it, and makes some lovely shots...the flower with drops of rain is marvelous!!
Grace

I really like your 'lizard' Snapdragon, but all of these pictures are wonderful. You get some great pictures with your iPhone.

Ruth, great shots! Sure nice to see the Orioles and that they picked your yard to shelter.

Sounds like your weather is not cooperating, Ruth. I hope it improves soon - very soon!

some pretty images ruth....but the rain images are just a tad bit scarey. there have been so many serious storms over the past few years, i have a small fear of rain much more then ever before.

i enjoyed the pictures of the orioles, i don't get them here, so they were a very special treat!!

good luck with your flowers, i hope you don't loose anything!!

Ruth: What a strange Spring with the rains and the freezing weather. I enjoyed the photos of the Baltimore Oriels.

That's a lot of liquid, Ruth. And fine images as always. Stay safe.

We had a heavy rain on Monday but today was perfectly beautiful. Such an upside down spring. I enjoyed your photos.

It is raining here too, but I can't complain, this is the most beautiful spring we have had in years. The flowering shrubs have been spectacular. Sounds like you will need a blanket too!

I often wonder where the birds go when it rains so hard. : ) Cool photo!

Wow - that's some rain, Ruth ! [and I notice you still refer to it as 'inches' of rain - I learned measurements in imperial too and still can't visualize mm of rain unless I convert it].

Beautiful orioles - have only seen one here once.

My goodness, you have had lots of rain and some strange weather with freezing temperatures this late in the season. Very nice macro photos. I haven't seen a Baltimore Oriole in years, though I know we have them here in Kansas. Take care and don't let those plants freeze!!! Have a lovely weekend. Mickie :)

Hopefully it clears up and you have some nice weather. Looks like you've had plenty of rain.

That rain drop bejeweled leaf does make it look like a lizard. We've had a goodly amount of rain too ... for us ... or at least it seems goodly but when you go out and look at what actually fell. Sigh. Not much. So I guess it is mostly drizzle with the odd cloud burst.

Hi, Came over from Dorothy's blog. Your pictures are so awesome. Enjoyed my visit here!

omg, that looks like a lot of rain. i do hope you get some nice weather.


have a happy and safe memorial day weekend!

We are having lower-than-average rainfall this year in California. Rain has been very sporadic...none for weeks on end, and then a 5 hour downpour, then none for weeks.

I liked the photos of the two little Baltimore Orioles taking shelter under your deck railing and also the macro of the lovely pink rose with droplets on it. Great shots, all!

We are having lower-than-average rainfall this year in California. Rain has been very sporadic...none for weeks on end, and then a 5 hour downpour, then none for weeks.

I liked the photos of the two little Baltimore Orioles taking shelter under your deck railing and also the macro of the lovely pink rose with droplets on it. Great shots, all!

Beautiful post! I thought that actually was a lizard! Hope things are back to normal at the creek.