I will show some more parade entries.
As I said we are home to the Canadian Fossil Discovery Centre ,Here is a replica of one of the fossils discovered in this area. 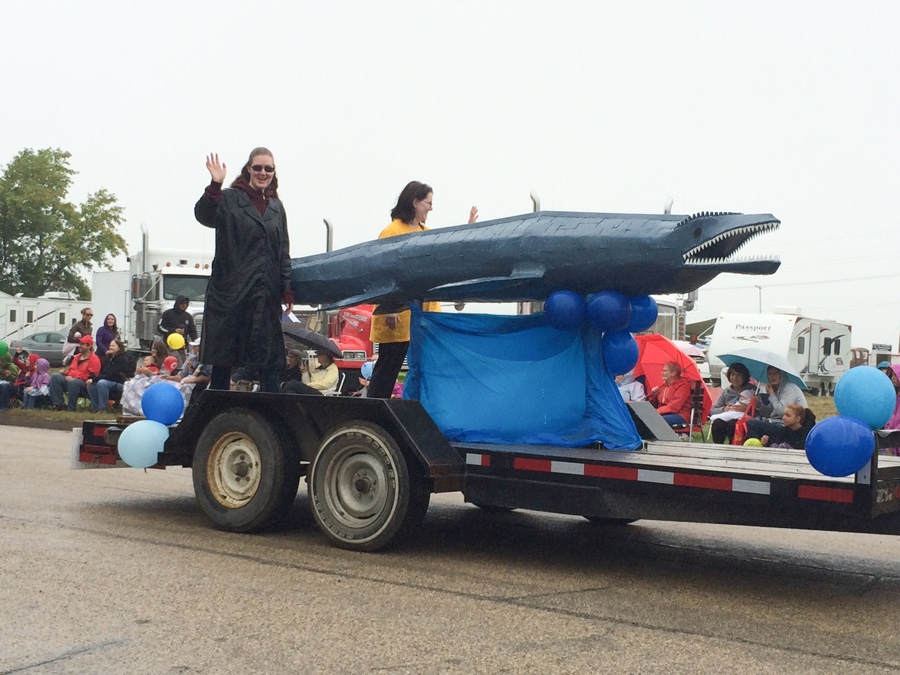 I didn't know that the Fintstones were still alive and active,but their car was driving down the parade route. 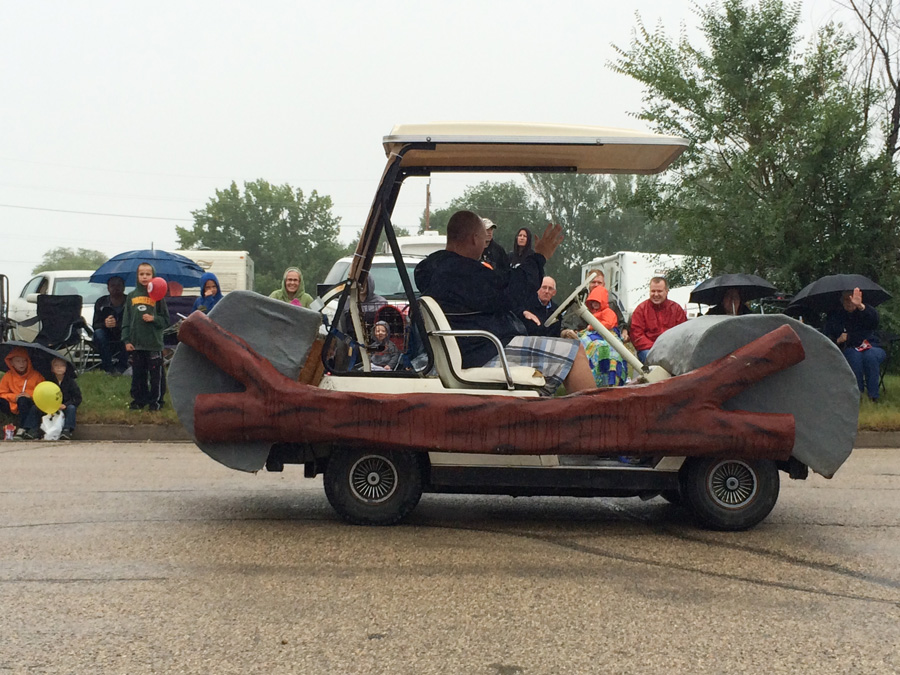 So I now know what I need to look for when shopping for a motor home. It has to have a TV on the outside. How else could one survive this roughing it,called camping? LOL 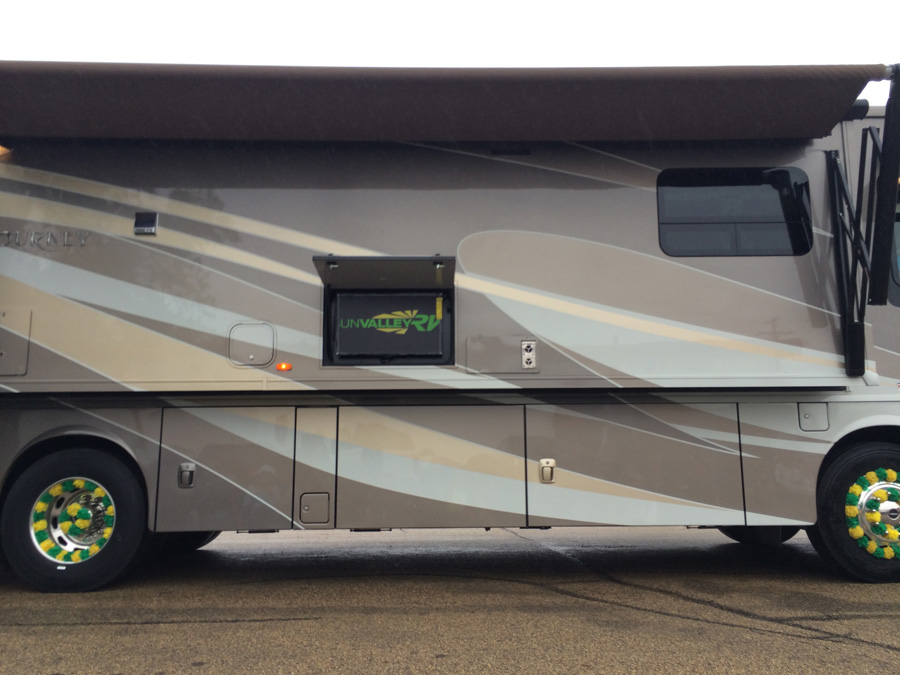 The local Taekwondo group was out,handing out candies to the youngsters along the parade route. 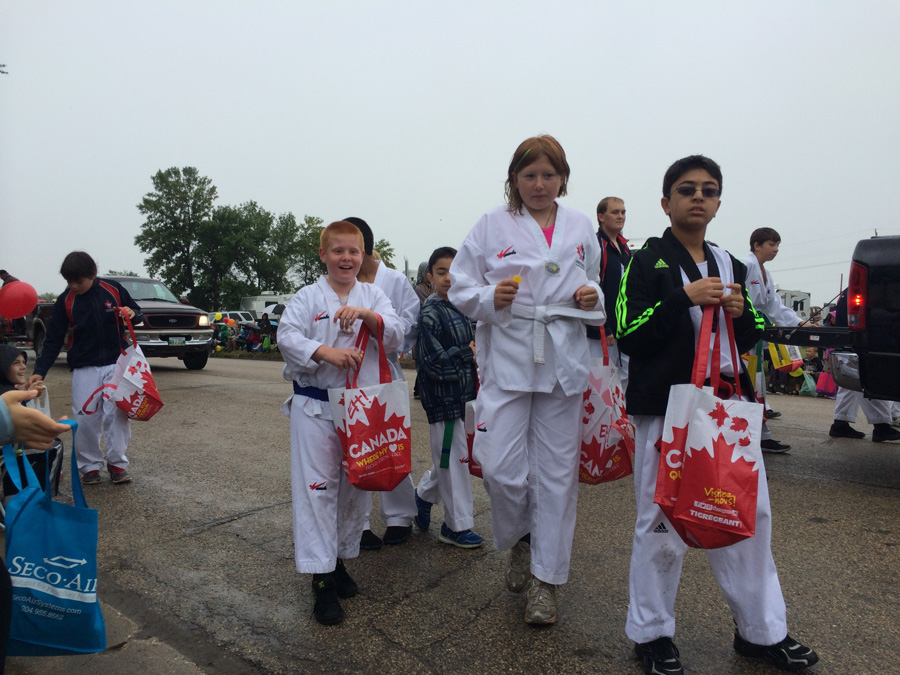 From motor homes with outside TVs to some the old vehicles,all are on display in the parade. 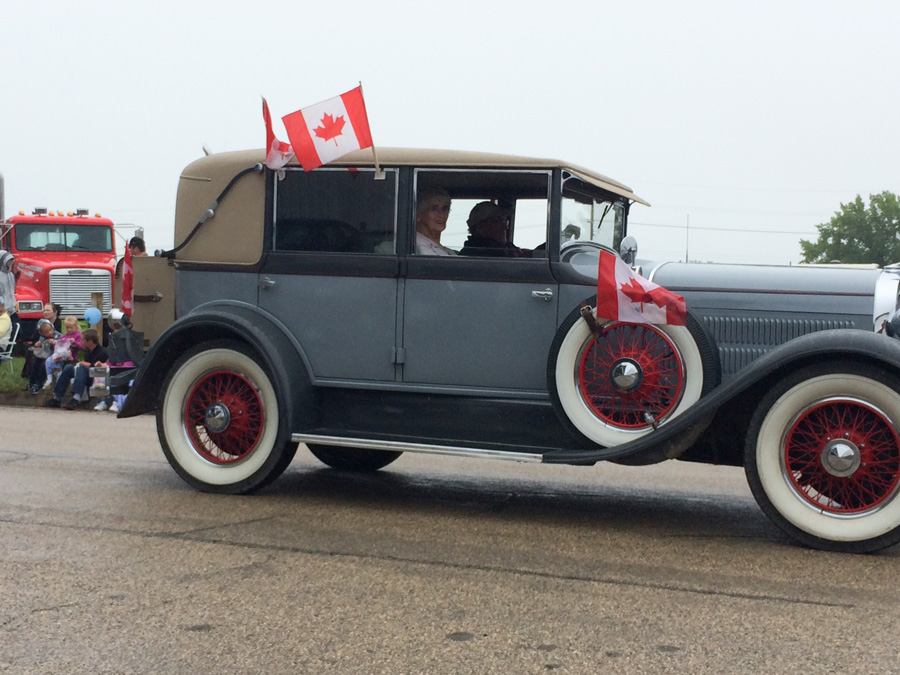 With all this activity,one must be fed. My church was cooking up some delicious apple ring fritters. All funds raised were going to the Pembina Valley Bible Camp,so it was only right that Todd,the director got the first serving. 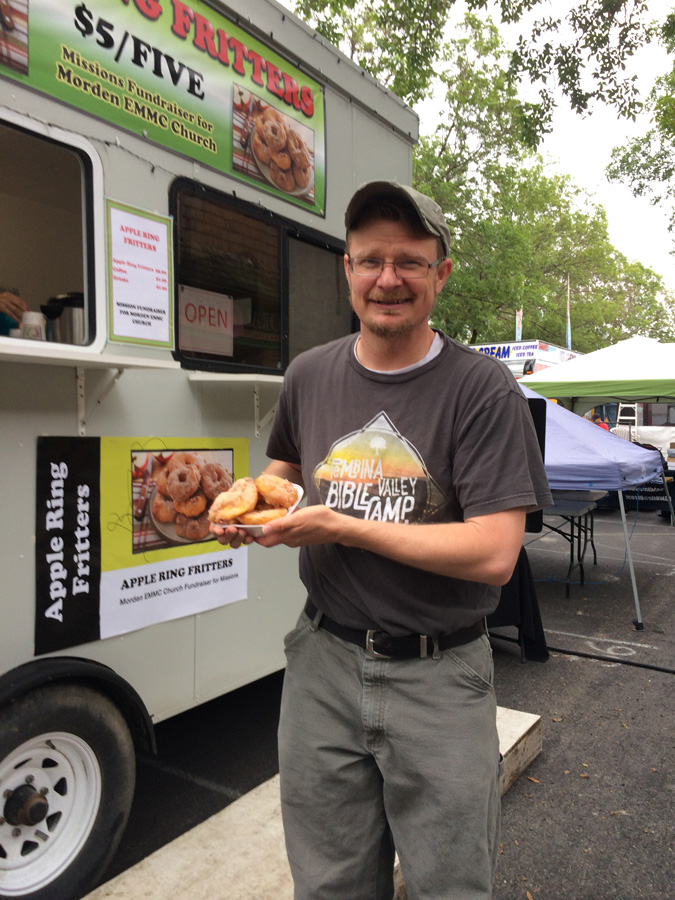 This is a small look at the campers parked at one of the school yards in town. Yes,we do have a campground,but it is usually overfull,so a school ground is opened up for additional space. 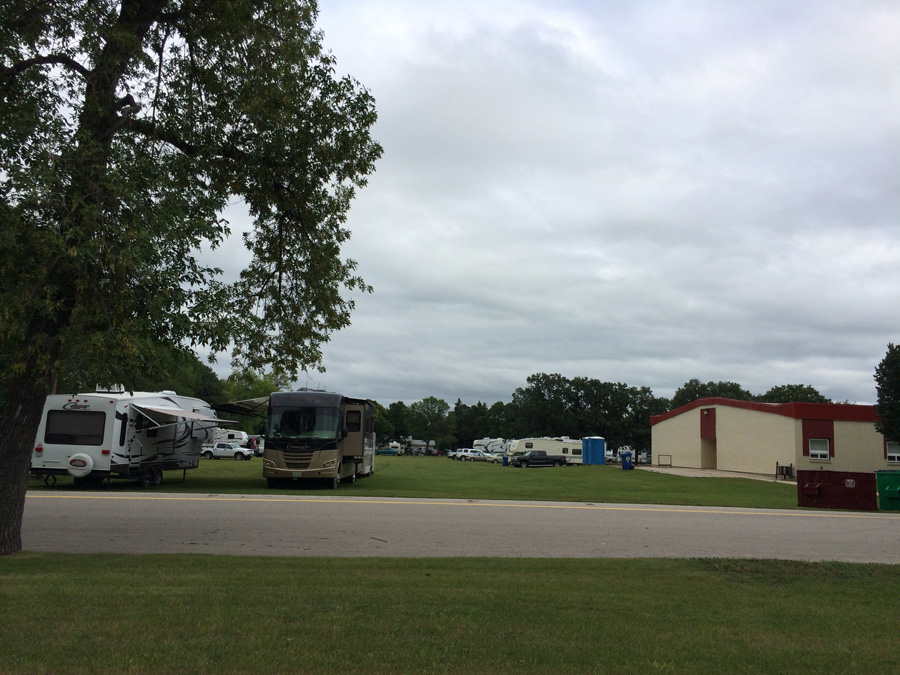 My favourite ride to watch is the Merry Go Round. It is quieter and quite pretty. Of course I only watch.I will not be doing any riding,on any rides. 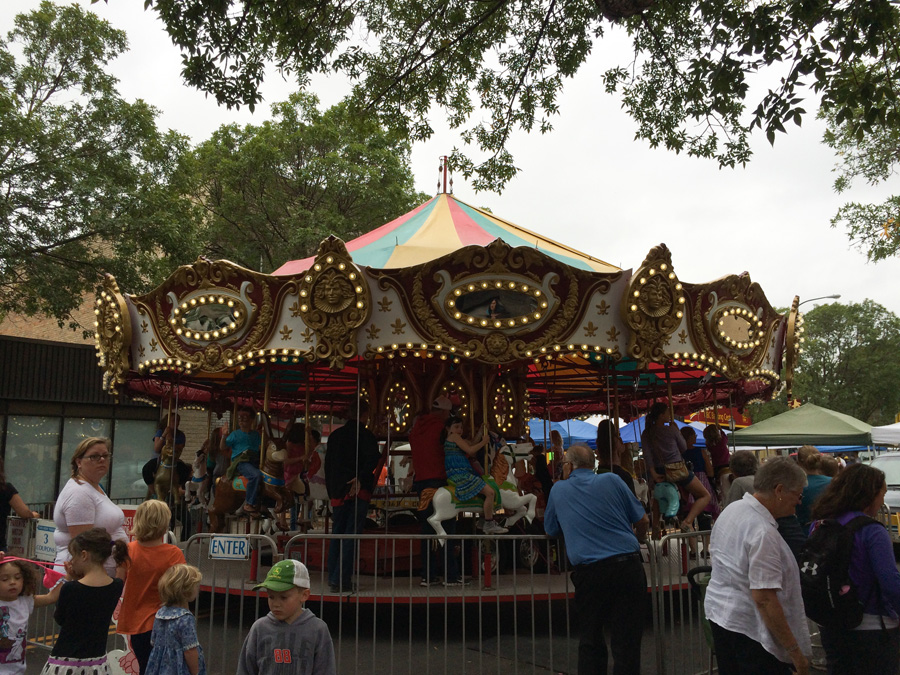 My favourite time of the festival is Sunday. The city has designated that all entertainment on the main stage is Gospel on that day.
We had a soloist,Aaron Ruston,who opened the day. Aaron sings a lot of Booth Brothers songs,but it doesn't matter which song he sings,he does a super job of it.This man has an amazing voice.
He was followed by an amazing speaker,Ron Pearce.Ron has been all over the world,sharing the Gospel and has so many interesting stories to share.I did not get a picture of him. 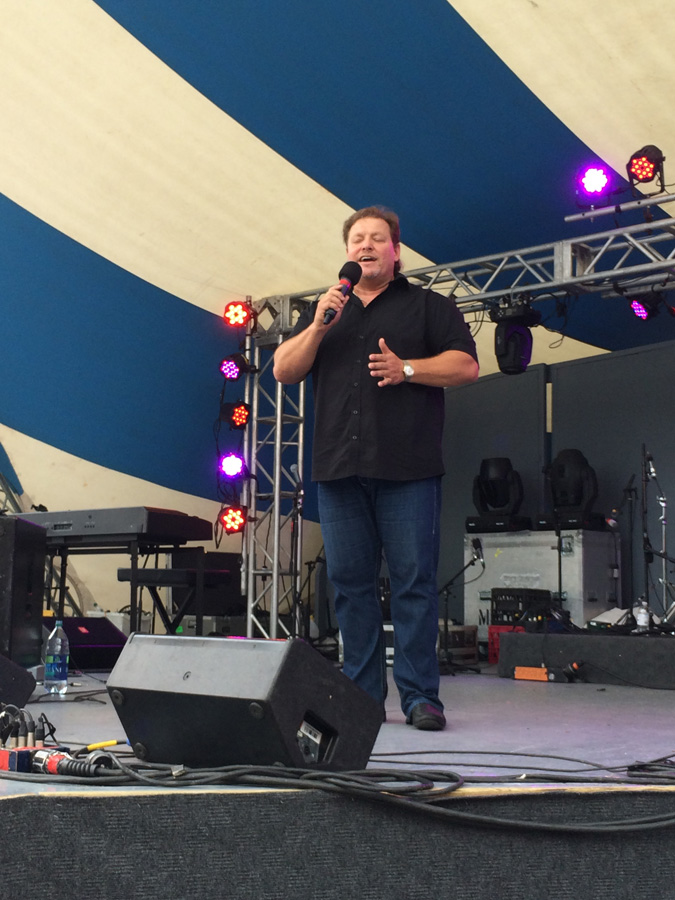 Another group was the Torchmen from Ontario ,Canada. These guys sing Southern Gospel style and do a great job. I had not heard them in person before,so it was a treat for me. There were a couple of other groups,but once again,I did not get pictures. 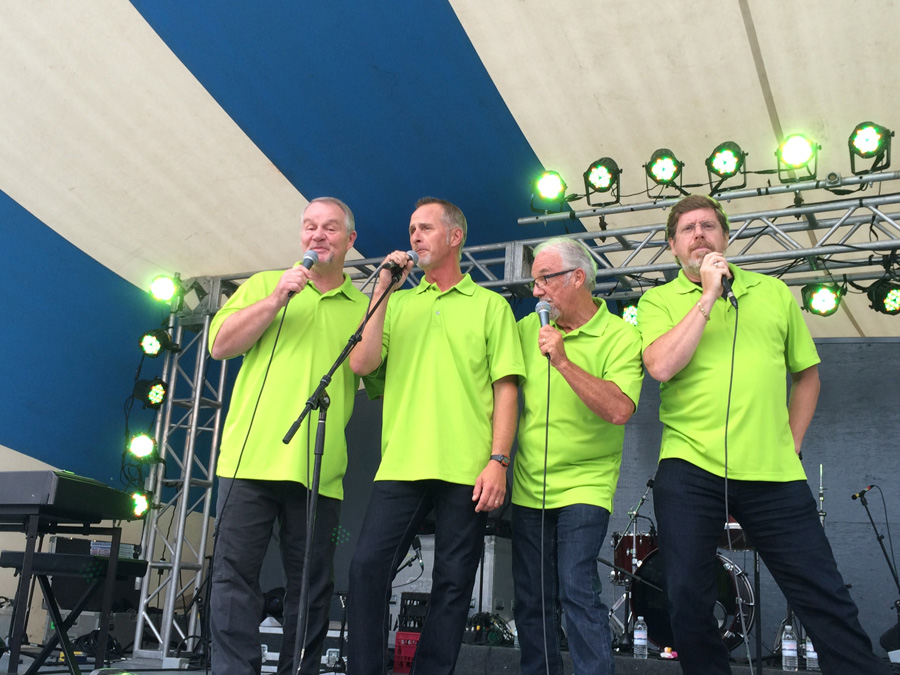 If you ever have the chance,come visit Morden during Festival time. We will treat you right,fill your tummy with good food,your heart with good music and preaching.
Posted by Ruth Hiebert at August 28, 2014

I sure would like to take you up on your invitation. I think any time would be a great time to visit Morden (except possibly the middle of winter), but the Festival would be a nice bonus. I wonder where I could get a Flintstone car?

It looks like so much fun! I love those green and yellow wheels on the camper. A T.V. OUTSIDE of it? I guess it's so you can sit around the campfire and watch shows! Maybe watch the news and see if there are any bears around, ha ha ha!!

That sure sounds like a fun festival. I'm glad you had such a great time. I like what they do for the Sunday events. That's really nice.

Have a great weekend ~ FlowerLady

This looks like so much fun, but the Flintstone mobile made me laugh!

Great fun!! I like the Flintstone car and the apple fritters!! Yum!
I know you all had a wonderful time...I'm ready for FALL!
have a good Holiday weekend....be safe.

I love that old car!! I will trade my van for it!! Those fritters look yummy!

Ruth, looks like it stopped raining for Part 2!! I love to see all the community involvement!

What a fun festival! I would have enjoyed the gospel music. It has always been a favorite of mine.

I love parades, so cool to see the flintstone car!!

I really like the way the whole town seems to get together to make this festival a success. Wonderful community spirit!

Hi Ruth, You will get a kick out of this. After looking at your photos in this post and seeing your kind invitation to "visit Morden during Festival time" ... I thought that sounds good so I opened up Google Maps and checked out Morden. It is 1,459 miles from Seattle. They suggest a route that will go through Washington, Idaho, Montana, and North Dakota until turning north up to Cartwright, MB, turn right and head east to Morden. They say it's about 22 hours of driving. When clicking on "Street View" they show an inviting scene around a lake (Lake Minnewasta?) with some motorhomes or travel trailers parked in a nice setting. Now that would be a fun trip, but, of course, I would need to rent the motorhome. I love a good road trip. About the closest I've ever been to Morden was a trip to the International Peace Garden, on the Canadian/US border near Boissevain, MB. I plan to do a post on my blog about my visit there. Thank you, as always, for sharing your interesting blog and your comments on mine. John 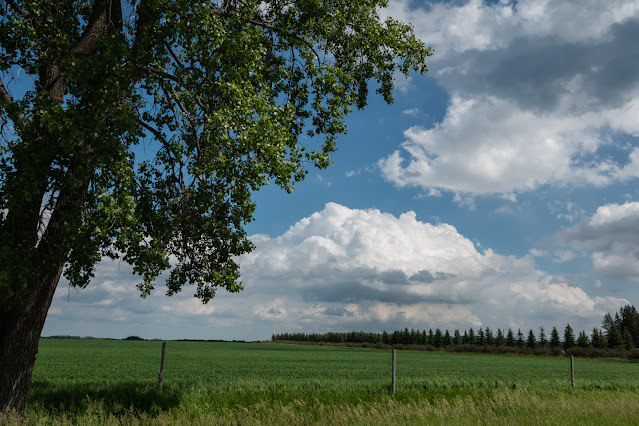