Ever since we moved into this house in 1992,I have been dreaming of having a white kitchen.
Jake and I had talked about it, but it seemed like a lot of work and neither of us enjoyed painting so it just never happened.
One Saturday morning, Steve asked I had ever considered having  white kitchen cupboards.Of course I had but it seemed out of reach.Before that day was over both he and I had done some research online and visited a popular paint and decorating store. We had all the information we needed and Steve was willing to do the work. This post has lots of pictures so bear with me.

This is the way the kitchen looked before we made any changes. 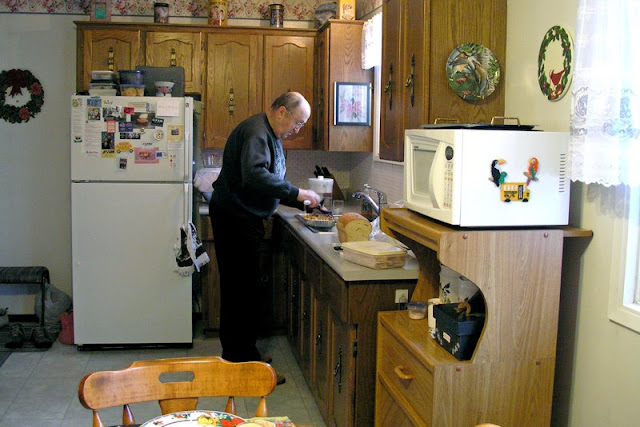 The first order of the day was to remove all the brown door pulls.
You may also notice that the wall paint has changed color. That happened years earlier and the rose border above the cabinets is also gone. 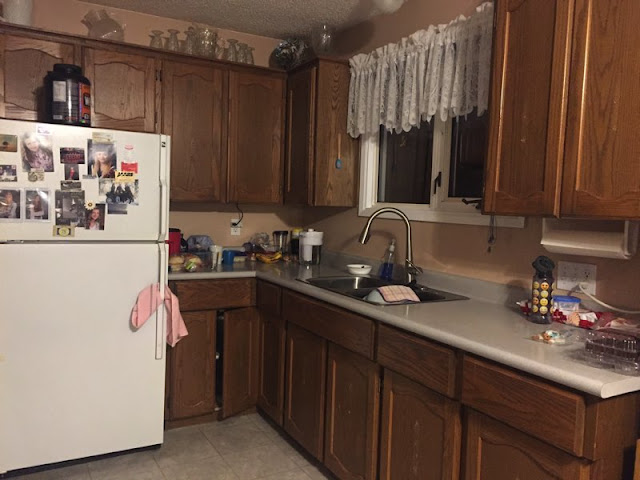 The cabinets were washed down with a product called TSP. This takes all the grease and dirt off them.Then they were sanded.The holes from the pulls had to be filled with putty and sanded, and the painting can begin.It was two coats of oil base stain blocker primer that went on first. The primer was oil based but was completely odourless.That was wonderful. 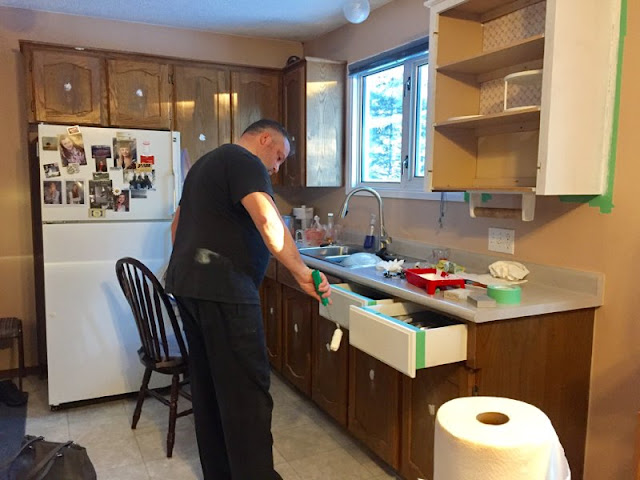 Kai got in on the fun as well and primed several of the doors. Thankfully I had some old long tables downstairs which could be used as work surfaces. 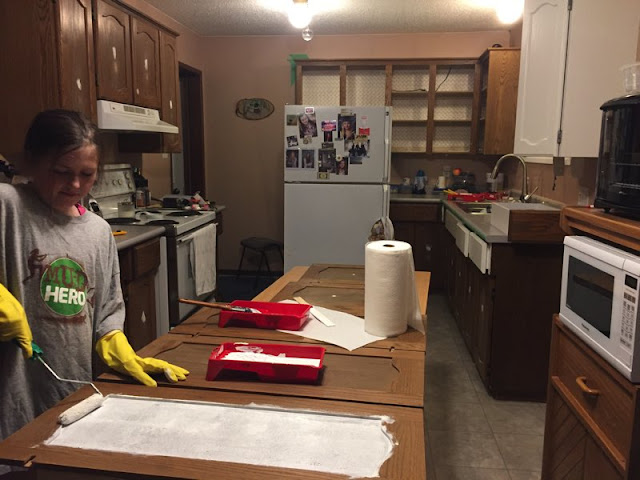 Once the primer had dried Steve put on two coats of Benjamin Moore Advance top coat in a Pearl finish.The top coat was a latex. 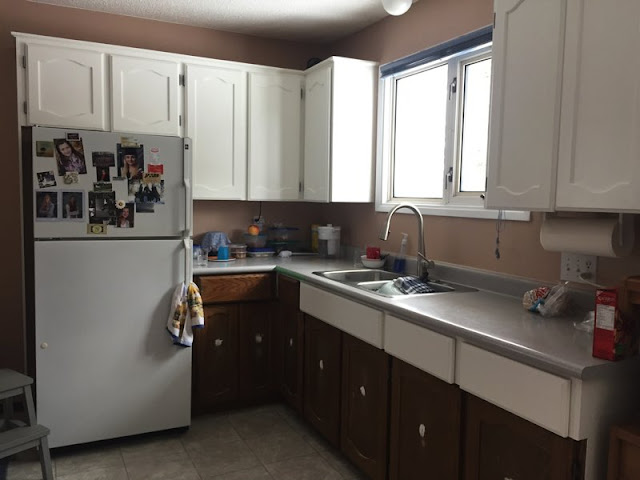 This was the primer we used. 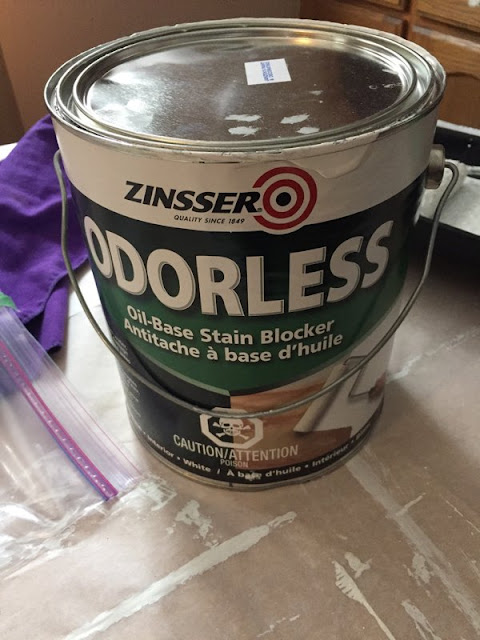 This is the top coat.It was tinted in Cloud White. 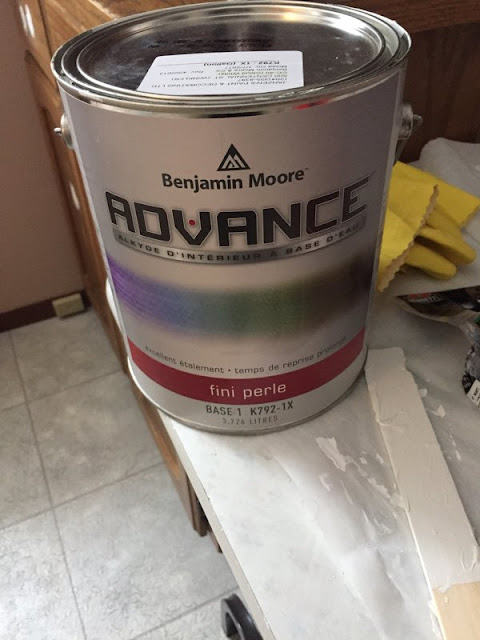 With each new step.I was thrilled to see  the difference. 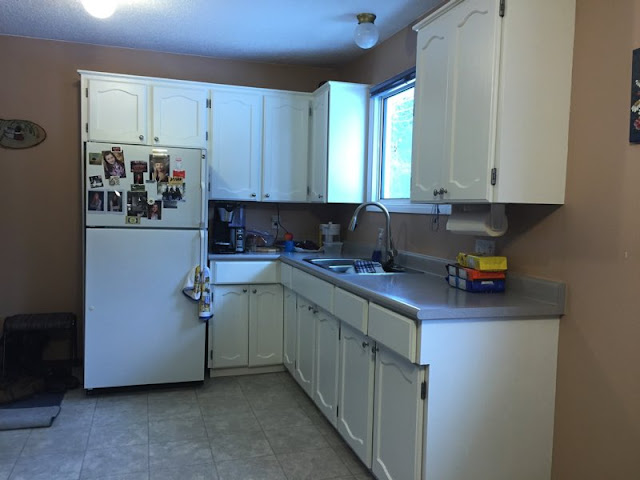 Both sides have been painted, now for the backsplash. 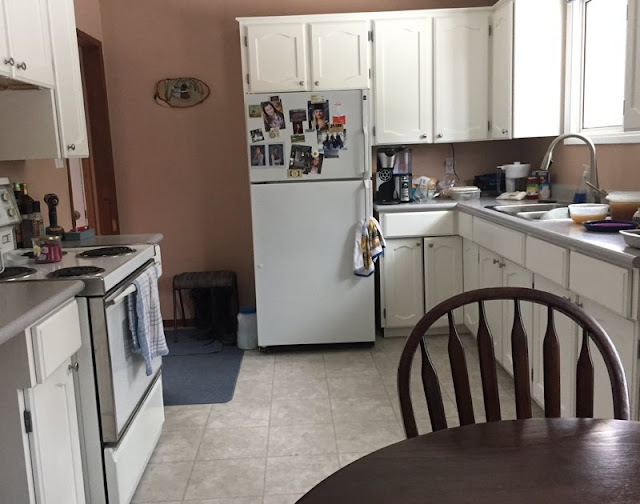 The built-in china cabinet has a new life as well and I love it. 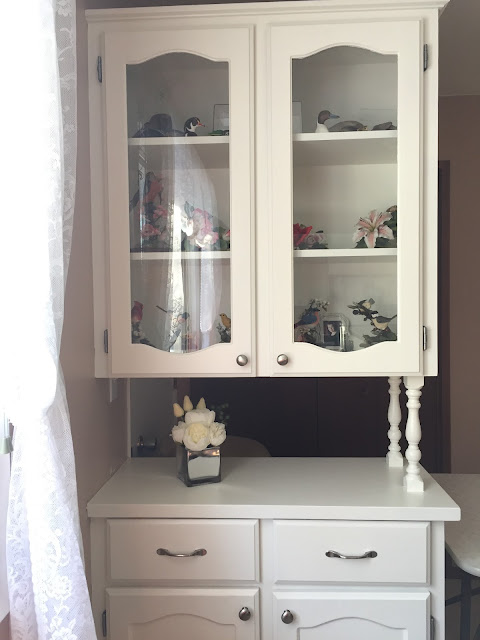 On a Saturday,while I was in Winnipeg at Mission Fest,Steve started with the backsplash.
I am super thrilled with how it looks. 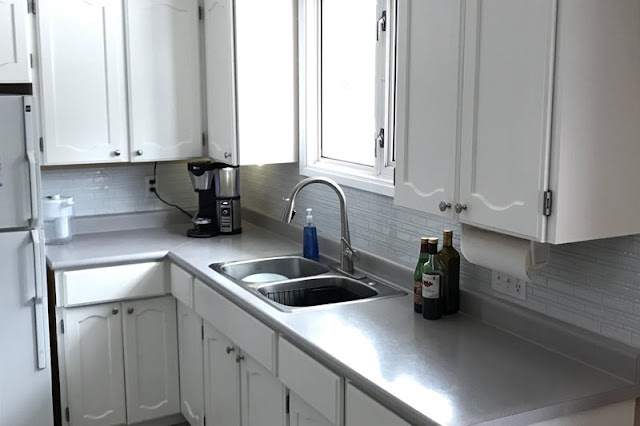 The backsplash is something called Smart Tile.These are vinyl tiles which are peel and stick and look like glass tiles.It is very easy to apply them and according to the research I have done, they are very durable. Numerous reviews said they were the best brand to use. 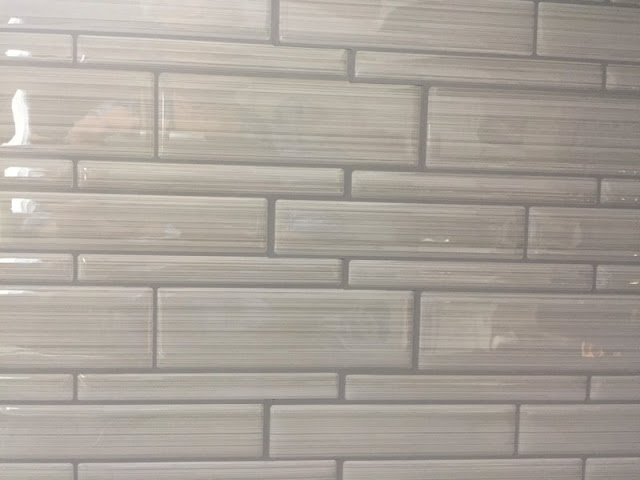 We had at first considered refinishing the counter top as well, but I really like the light and bright look it has now,so we won't be changing that.

I am not getting any endorsements for mentioning the products by name.I just wanted to put the info out there in case someone is interested.

I still walk into the kitchen and stop to admire how it looks.I would never have tried doing this on my own. A huge thanks goes to Steve who has worked diligently to give his Mama a new kitchen.
Perhaps I should spend time in this new kitchen and bake him a special treat.
Designed for you by Ruth Hiebert at 7:46:00 PM