Wow,I am falling way behind in posting.I have been busy, enjoying life and have not taken the time to post regularly.OK, enough of the excuses, so here I am with another post.

Photography is so much more than just capturing the moment, although that is very enjoyable. In today's digital world it would seem that most, if not all pictures need to be edited. Most of the time these edits include some cropping and perhaps exposure adjustments. Sometimes a picture lends itself to more creative editing.

Under the guidance of my son,Steve,I edited the following pictures to show them at their best.
I don't remember all the steps I took, but I know that this one had more contrast added, to bring out the details in the snow. I also cropped it.

This is the same picture as the one above, but it has been turned into a black and white.I think this shot lends itself well to this look.

An early spring rain left droplets on the trees, so I simply had to capture the moment.
Here,I also darkened the picture and again added some contrast. 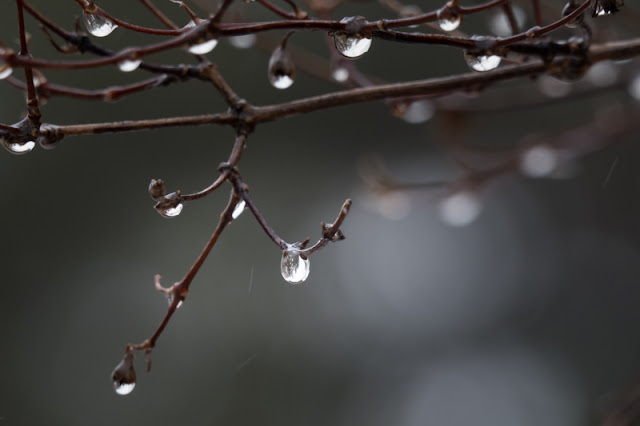 Similar editing as the one above with the addition of  more pleasing cropping.

The frost that builds up around the heated birdbaths is often quite pretty. Once again, the picture was darkened to bring out more details and contrast added.This picture is cropped into a narrow rectangle.

This is the same picture as the one above, but a slightly different crop.This one shows a little more of the reflection in the water. 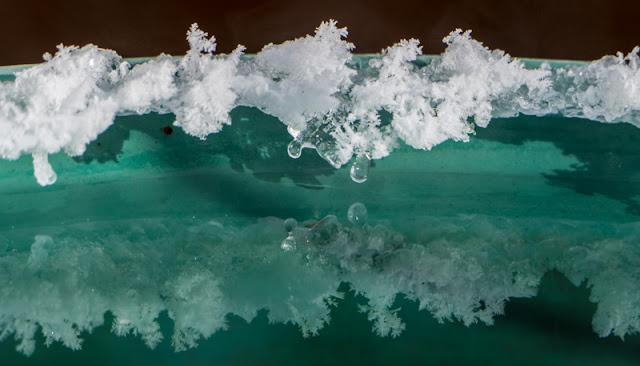 I am certain that under Steve's guidance I added more editing steps, but I don't remember them ,so I have shared what I do recall. What it comes down to is, edit so that the picture is pleasing to you.

Closing Thought:
I can click a shutter button or edit the captured image, but in the end we must realize that
Nature is the art of God.
Designed for you by Ruth Hiebert at 8:45:00 PM

Absolutely fantastic images in all stages of editing. And you know how much I agree with your final thought! ♥

These are beautiful photos. You are as gifted with editing as you are with the camera.

WOW---you, Steve and George are real photographers.... I have fun --but am not interested in putting forth all of the extra effort that it takes... BUT--I love looking at 'real' photography.... You did GREAT.

Beautiful edits! I think the black and white edit looks more like desert dunes! And the bird bath edits are divine!!!

Nature is the art of God. Your edits show the beauty

You've done a beautiful job with these edits, Ruth. I'm still a beginner in that activity.

Wow Ruth! These are wonderful shots and edits. Yes, we do have to edit sometimes and get some amazing results. I love the birdbath pictures. The color, snow, water droplets and reflections. Just wonderful!

Have a great weekend ~ FlowerLady

so very true about Nature being God's Art.. I love that last edit, so beautiful... reflections and drops and colors. all of it. the first one looks like a small ant was on the top of a cake with whip cream on it. love that one to...

I enjoyed seeing the small changes you made to these photos in order to enhance the beauty of each picture. Great job Ruth..

I love editing photos ... almost as much as taking the original shot. You got some great photos and edits! Love that first one of the drifted snow, very Arctic tundra.
Wendy

Editing is important in photography as often it needs cropping, lightening up or darkening, and it is fun to change a look!

Ruth, wonderful images! I like them all, in the various edits! Photography is wonderful these days. Gone are the days where we had to take what we got. I'm a strong believer in using all the tools available to us, including all the wonderful editing tools!

I love these photos especially the raindrops on the twig & the last one with the reflection! Well done!

THANK YOU for this interesting post friend as you gave me lots of ideas to make photos more beautiful by giving them little more focus .
absolutely lovely outcome .
editing can turn pics into more extraordinary

Thanks for sharing....I'd love to learn more things like this.

these are beautiful ruth!! i never edit my pictures, i will occasionally crop them but that's about it. i am a natural kind of girl, so my pictures stay natural as well!!! have a wonderful weekend!!!

As you know, I love to edit, Ruth. I think it's part of the creative process. Wish I had Steve to look over my shoulder!

These all look better with editing. It's nice that you have a professional in the family. Blessings, Diane

Fantastic editing! The lighting and shadows on the snow makes it look so dramatic. Love the closing thought, too!
Happy April...have a nice weekend!

Love the drroplets, preerr the first colour shot to the B & W one adn the colour in the last 2 shots is amazing. well done with the edits.

i am glad you got some help from Steve, that is fun learning new edits or tools for your pic fixing or changing it up. i like the 1st shot cause it makes me think like a desert ... and you are seeing like a snow desert. very cool!! hope you are well. we had a bunch of rain lately ... hoping it will help our plants. know we need more but hope it helps. take care. ( ;