Several of you have asked me to share more pictures of my time in Red Deer,Alberta at CGMC
I hesitated to share these, for several reasons.They are not great quality and in too many of them, this old woman is showing up, but be that as it may, here they are.

I may be at a Gospel Music Festival,but that doesn't mean that I can't watch the skies.During intermission one day,I stepped out of the building to get these pictures.
"Note that all pictures are taken with my phone." 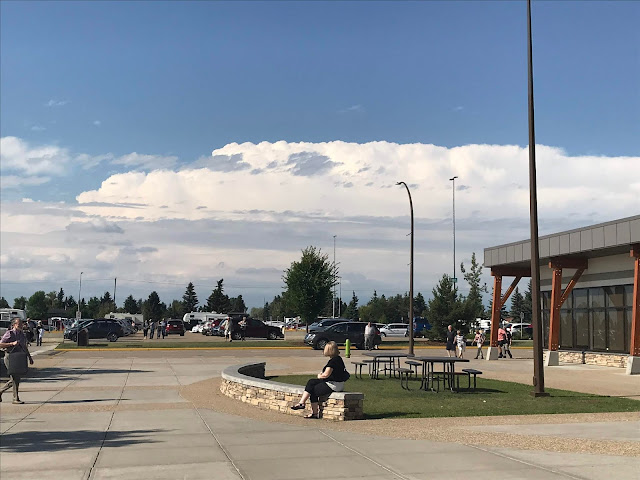 There were some weather watches out, but all we got was some wind and even that wasn't too terrible. 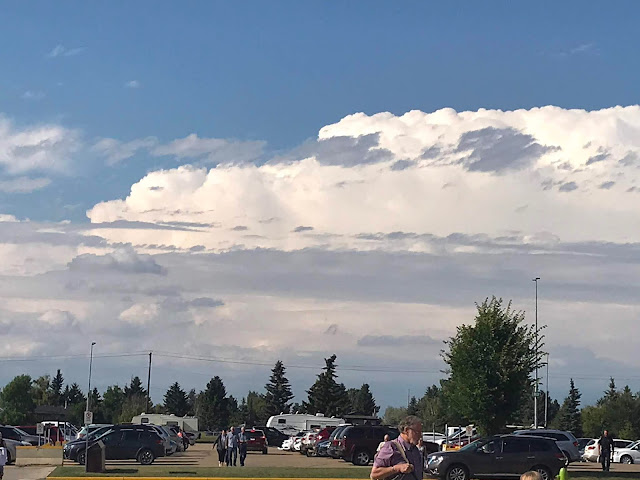 I love getting pictures of the various groups and this is one that I had never had a picture of before.These are The Ball Brothers.
L-R are Andrew Ball,Daniel Ball,Chad McCloskey and Matt Davies.
This group is known for it's tight harmonies.For friends in or near Manitoba,they will be in Winkler at the Harvest festival in August. 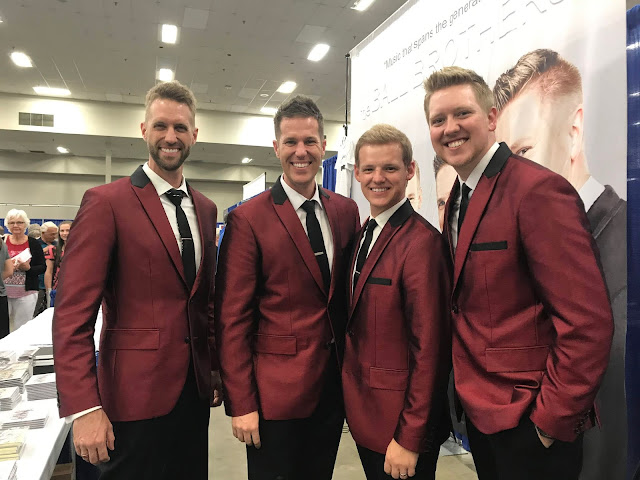 The afternoon and evening concerts are amazing, but so are the morning chapel services.Pastor Leon Thrones from British Columbia is a wonderful speaker and a great worship leader as well.There is never a question as to whether or not we will get up early to go to chapel.I wouldn't want to miss it. 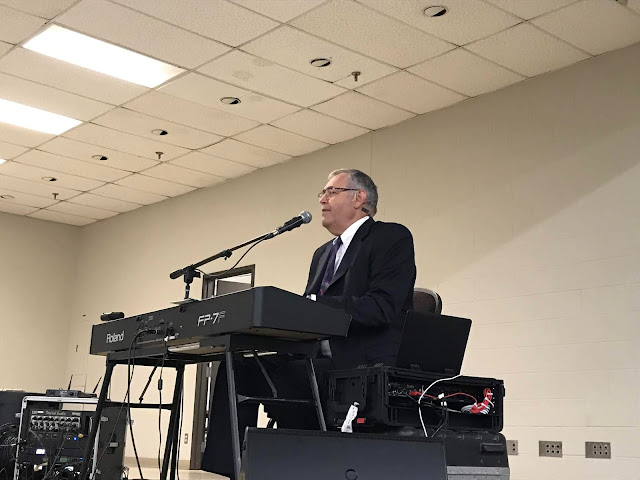 I have met these guys numerous times and finally got a picture of all of them. Triumphant Quartet have been together for 15+ years.
L-R are Clayton Inman,Eric Bennett,Scotty Inman(Clayton's son),David Sutton and pianist,Aaron Dishman. 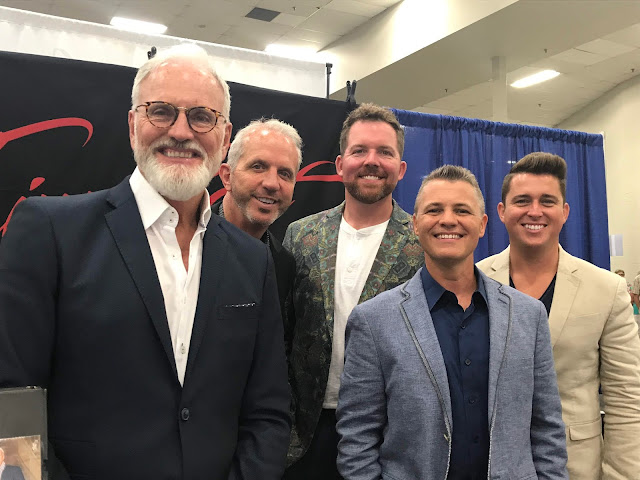 This is a fairly new group to me, but they have already won a place in my heart.Yes,that old woman had to make her way into the shot. This is 11th Hour. Great singers and just plain great folks.
L-R are Amber Eppinette, Jaquita Lindsey,me of course, and no I don't sing,Logan Smith,a young man with a powerful voice. 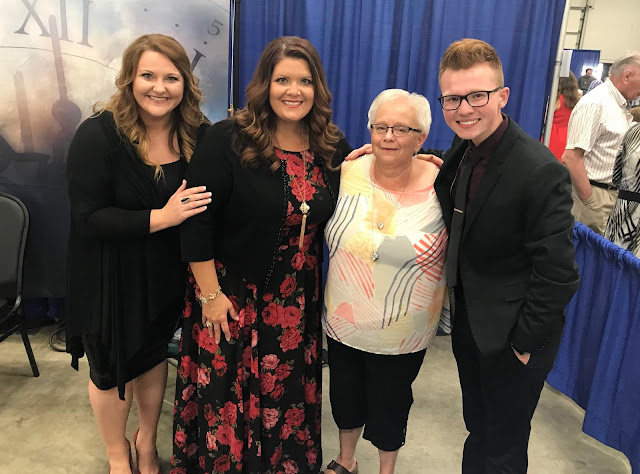 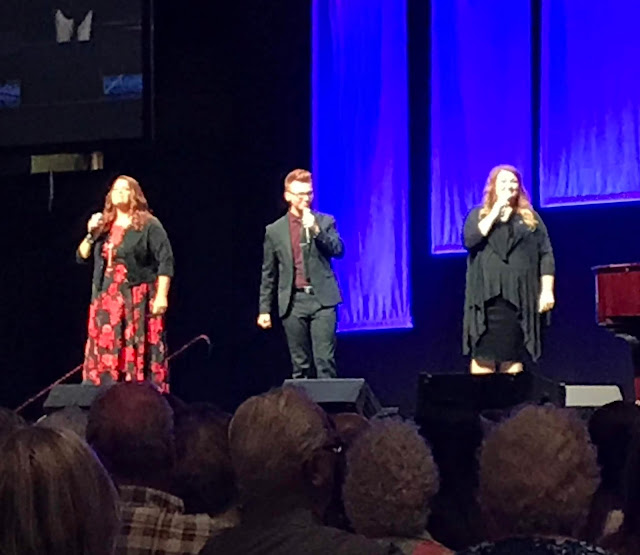 This is Triumphant on stage. 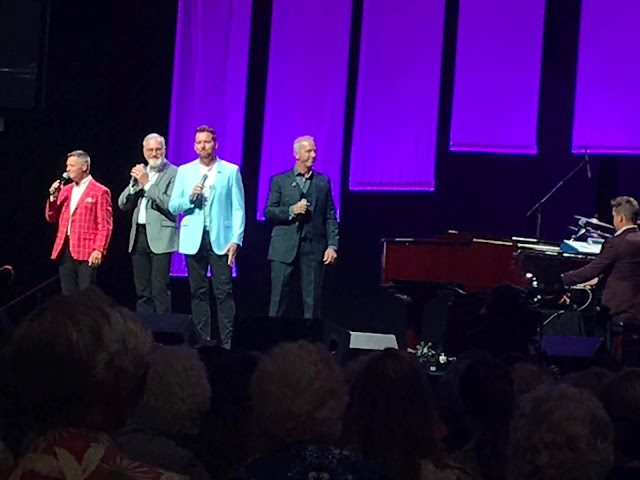 This was a shot during the afternoon Hymn Sing showcase, while Legacy Five was singing.
L-R are Josh Townsend,Legacy Five pianist,Gerald Wolfe from Greater Vision,leader of the Hymn Sing,at the drums,Micheal Booth of the Booth Brothers,next,Trey Ivey,who came to play piano for this event, and on bass guitar,Rodney Griffin of Greater Vision. 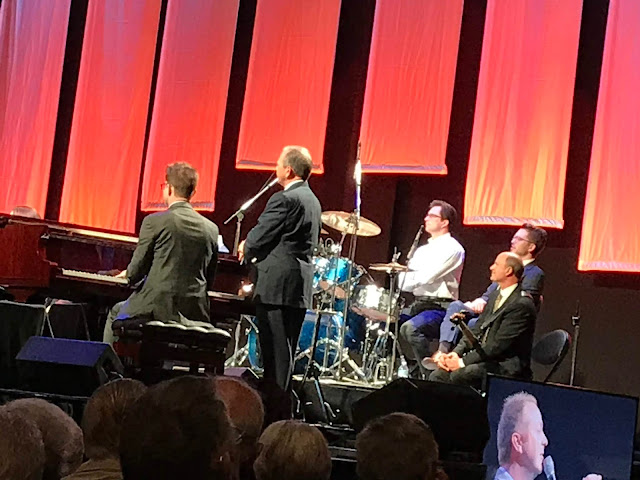 My friends Legacy Five.
Top left-Matt Fouch,Josh Townsend,Scott Fowler,group photo,Scott Howard,Josh Feemster.
This is a great bunch of guys, who love the Lord and can sing their way into your heart very quickly. 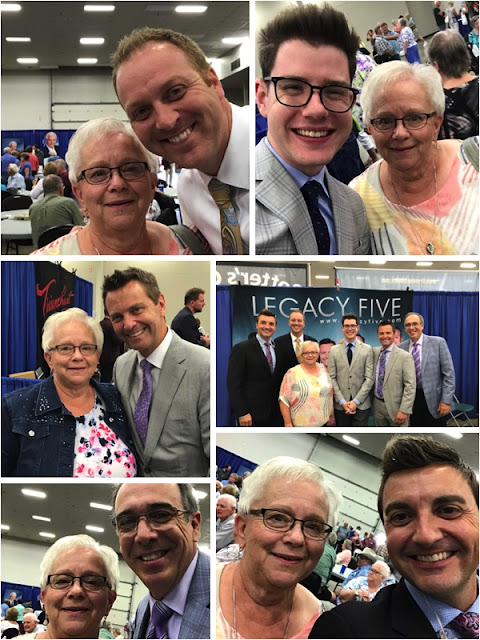 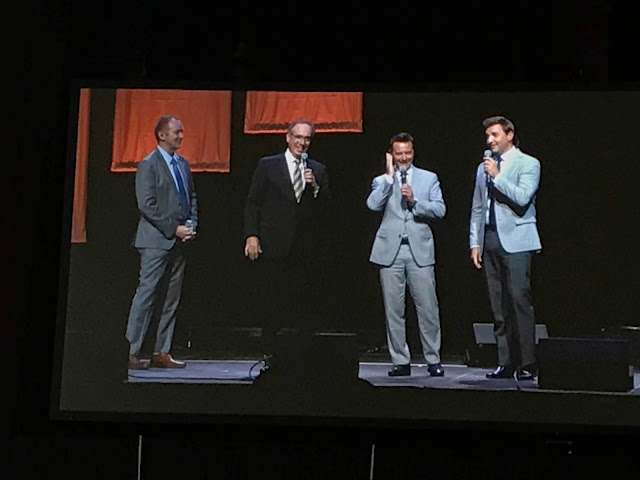 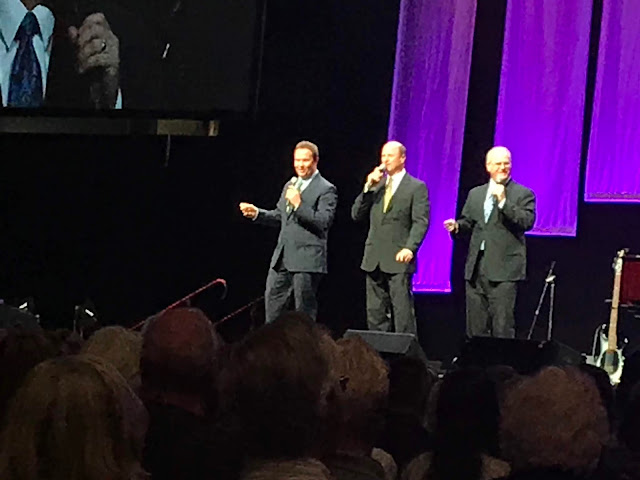 Had to get my picture taken with this young man.Logan Smith of 11th Hour. For those familiar with Southern Gospel music, he started out singing like Vestal Goodman and did a fantastic job of it.His voice has matured, but the quality is only richer and fuller. 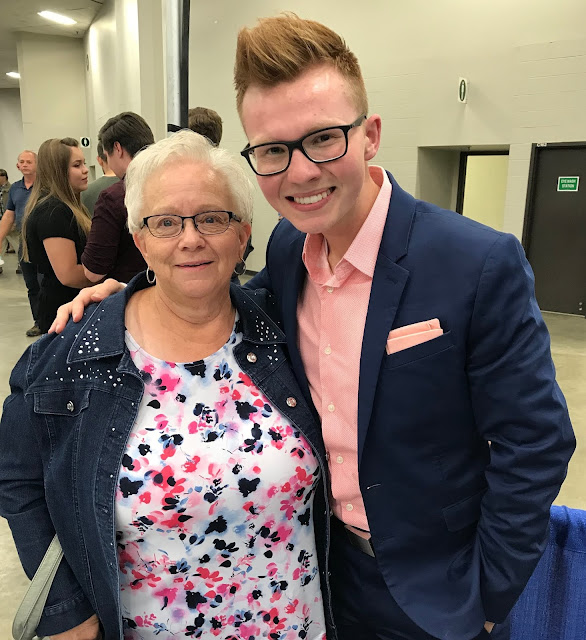 Last,but certainly not least are my friends The Freedom Singers,during an afternoon Canadian Showcase. Although two of these fellas live stateside, the founder of the group lives in British Columbia,so it is still considered a Canadian group.
L-R are Simon Ivascu,Jake Losen,Doug,Wiley.
Once again, if you are near Manitoba,these guys will be at the Morden Corn and Apple Festival in the end of August.You won't want to miss this. 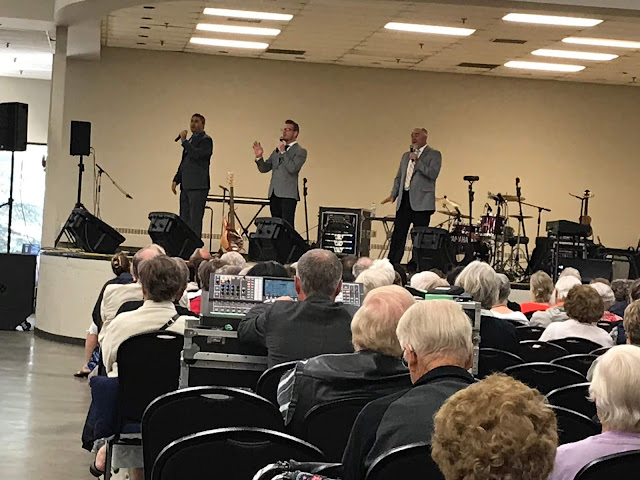 So these are a few of the many pictures I got.To me each picture holds a wealth of memories and I cherish them dearly.
It is like a touch of Heaven to be at this event, surrounded by like-mined people and all worshipping together.
Designed for you by Ruth Hiebert at 10:10:00 AM