I have been told that fishing and catching fish are two very different things.Since I have never tried fishing,I wouldn't know for sure, but I do know that the ones doing the fishing,which I recently watched, needed to be catching some fish to live.
I spent several hours at Lockport,Manitoba,which is north of Winnipeg,along the Red River. Yes,there are some locks there for boats to go through, but for me the attraction was the American White Pelicans who are on the water.

This is a wide angle look at the bridge. 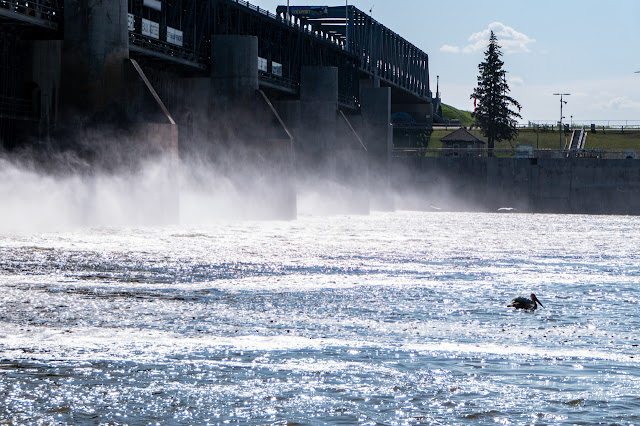 I think these Pelicans are about the most graceful flyers.Something about the white and black wings that is just spectacular. The wingspan can be as much as 110". 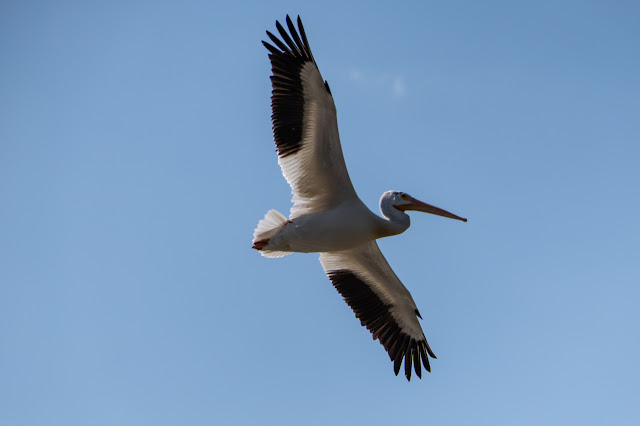 Oh yes, there were some human fishermen around as well.I later did see them catch a Catfish as well. 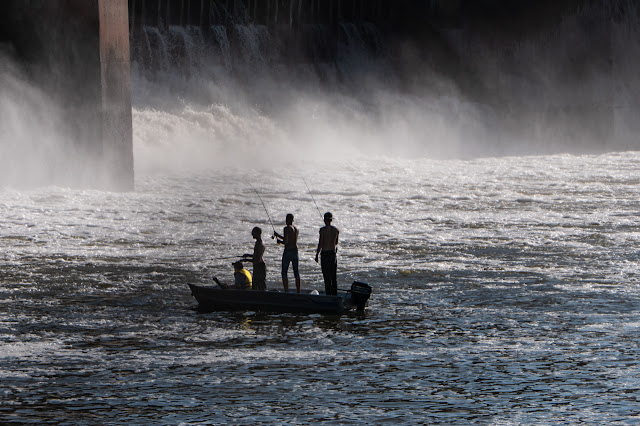 Obviously,this was not the first time that this gentleman had spent some time with the Pelicans.As soon as he sat down several birds swam towards him, waiting for a handout. 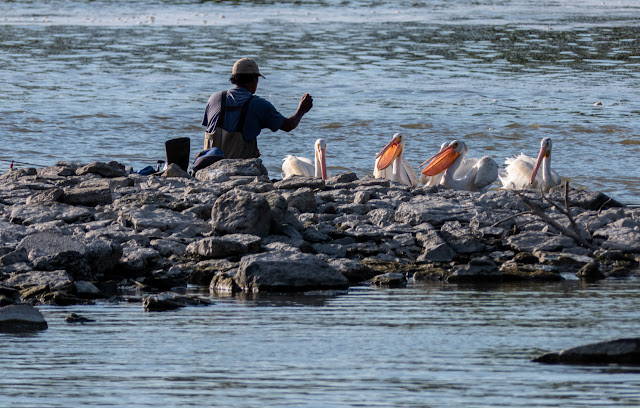 I found it so fascinating to see these large birds, back up against the falls and proceed to fish.Some of them were in that position for a long time so I'm hoping they got some tasty fish as well. 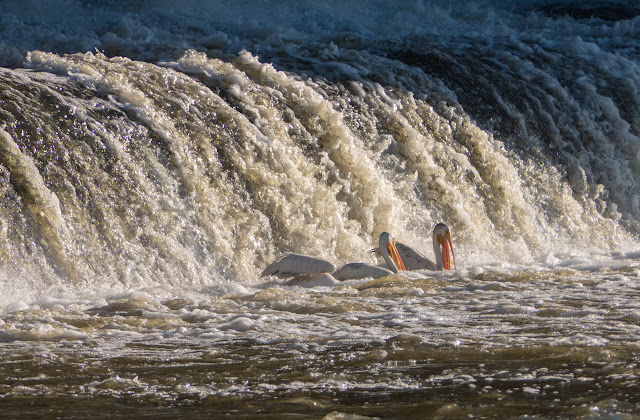 These birds fascinate me.They don't have the most beautiful faces, but they are still majestic. 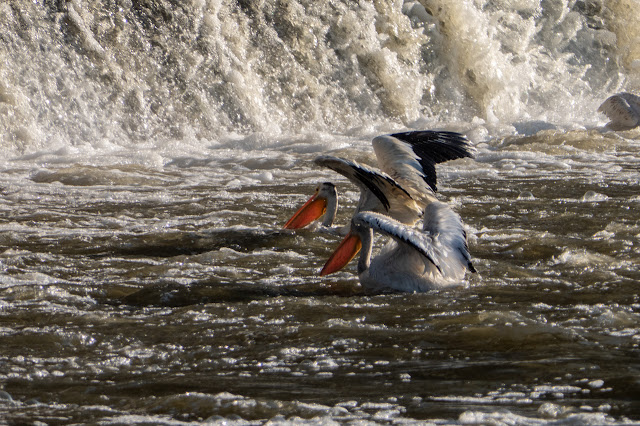 Something To Think About:
Matthew 6:26
Look at the birds of the air, that they do not sow, nor reap nor gather into barns, and yet your heavenly Father feeds them. Are you not worth much more than they?
Designed for you by Ruth Hiebert at 6:45:00 PM

We were only there once in all the years we lived in The Peg! Oh my, missed out badly, eh!! Glad you shared your pics.

You got some gorgeous photos here, Ruth. I agree about the beauty of the pelicans. I'm more used to seeing the brown ones when we've visited beaches in Florida. Their fishing styles are different, but they're both beautiful flyers. We like to visit a dam in the Smokies. Every evening, a bell sounds and the dam lets water through. At the sound of the bell, eagles, cormorants, terns, and great blue herons flock to the dam. Apparently the rushing water is a good source of fish for them.

I love pelicans, and have never seen a real one. They are all beautiful to me. These are fantastic, fishing at the falls!!! You got great pictures.

What fantastic photos dear Ruth! Thanks for that wonderfully encouraging scripture verse this morning also.

anyone reading this comment, if you did NOT enlarge these photos do it now. these are AMAZING Ruth. I went through the slideshow 3 times. I truly did. pelicans are my favorite birds and these photos are fantastic. so real I feel like I am there.. I would have stayed for hours just to watch these fishing birds.... fisherman don't like the pelicans to come close, it is dangerous for them. years ago, hubby was fishing, and 2 other men besied him, the fisherman cast his line the pelican dove and the hook caught in his leg. he tried to fly but could not. the man reeled him in. it took 3 men and myself to hold those wings while bob got the hook out. those wings are so powerful. I held one wing, and it was all I could do to hold it. happy ending he flew away without the hook... we have seen them steal fish out of the buckets and they are a delight to watch...

i had NOT enlarged the pictures and many thanks to sandra, i did...and she is right!!

all of these are GORGEOUS!!!! pelicans are amazing, i enjoyed seeing them so much here, i don't see them where i live!!!

I wasn't sure what to expect when I read the title of this post, but you have done a fantastic job of capturing those 'fishermen' at work. I too hope they all were able to enjoy a delicious meal.

Wow Ruth these pictures are spectacular. I've never seen a pelican. What great captures. LOVE the one in flight. WOW

I had not realized how large the wingspan was of a pelican! Great shots and info.

What a lovely place to be Ruth. Love all the water and fish and just the whole thing. Diane

I have seen Pelicans back up toward the waves before... I've also seen them (and other big birds) flying along JUST barely on top of the water looking for their dinner.... Interesting to see these birds at work..... They definitely are FISHING!!!!

Awesome post! Your photography is amazing!
The Scripture verse you have shared with us is perfectly picked for this beautiful post.

Thank you for sharing your beauty with us ❤