Hi everyone, my name is Steve Hiebert, Ruth's son.  She asked me to make a guest post on her blog for her about a series of images which I captured recently.  I plan on taking you on a little walk through and deep into the night sky.
This first image is shot of our own Milky Way galaxy which is roughly 100,000 light years across, a staggeringly huge number when you consider that light travels 186,000 miles per second.  At the lower right hand corner you see a brighter area which is the galactic centre, roughly 30,000 light years away from us. 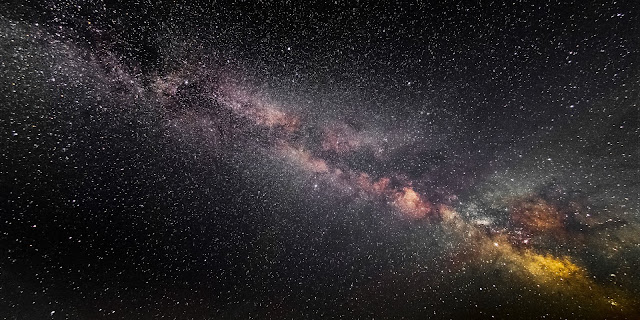 Now lets start our journey into this amazing world that surrounds us.  Below is the full image again but you see several boxes marked off... these represent the next few images that I have in this post and show an idea of scale of each image. 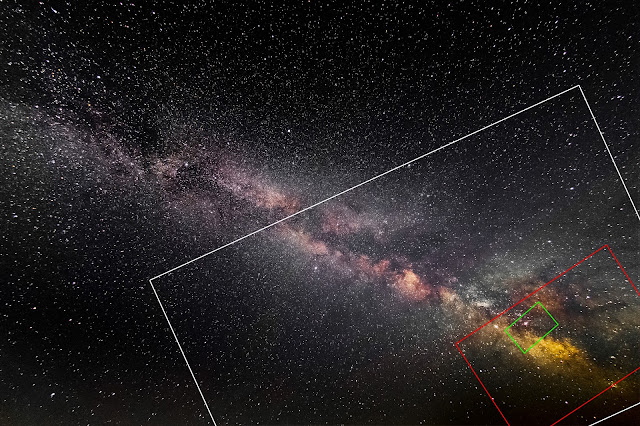 This first image is a wide shot showing again the galactic centre of our own Milky Way.  This area is rich with star clusters and nebulae.  Many of them located in Sagittarius also known as "The Teapot" because of it's distinct teapot shape.  If you look closely at the lower right area you can see the constellation.
Now into some technical details.  So often people feel that photography is just a simple "snap shot"... now for the real story.  This image is made up of no less then 45 exposures showing the stars and 15 "darks" (images taken with the lens cap in place to get a black frame that shows only the noise generated by the sensor). Using specific software you are able to blend all these images together to show a virtually noise free image at 6400 iso.  So if you do the math this image has 11 ¼ minutes of exposure time.  This, as I mentioned, removes noise found at higher iso images, and brightens the details and colors.  A very time consuming task, but I think the results are totally worth it. 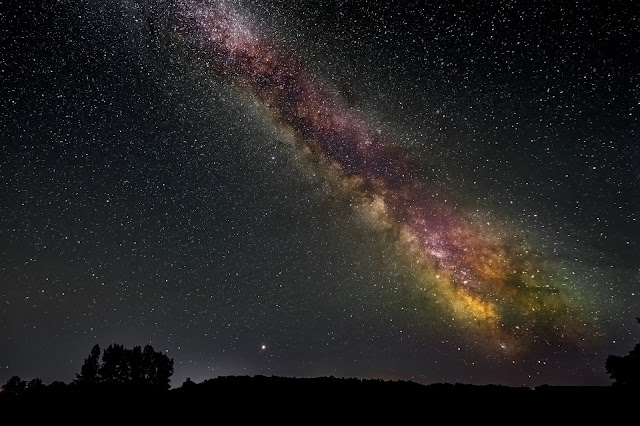 Moving in a little closer, we are more focused on the galactic centre of the Milky Way and focused in on the "The Teapot" which is located to the left side of the image.  You can start to see some reddish areas in the image which are nebulae.
As above this image is a stacked image with a total of roughly 5 mins of exposure time.  As many of you may know that when doing a time exposure of the stars, they move or streak across the frame.  So in order to avoid this streaking motion each image is only 6 secs long.  Problem number 2, I have a static foreground in the image, how do you keep both subjects stationary and not blurred?  Starry Landscape Stacker, I came across this amazing piece of software and it is truly a life saver.  Now a word of warning, this is strictly a Mac only software.  The software takes each individual 6 second image and aligns only the sky portion of the image to give you a bright starry sky while keeping a sharp stationary foreground. 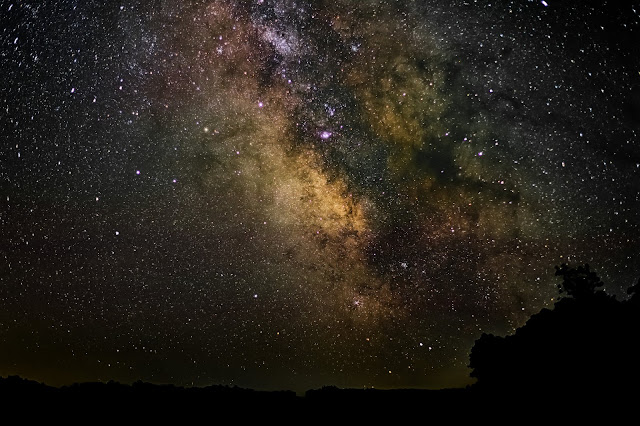 This last image is really pushing the limits of the above software and camera equipment.  This is the smallest portion of the original image.  This was done with a 200mm lens and only 2 second exposures... to counter act the short exposure time due to the long lens I had to push the exposure in Lightroom after the fact making this an equivalent of 102,400iso... a crazy number that should never be used, but again via stacking these images you are able to reduce most of the noise and bring out the detail.  You can clearly see the Lagoon Nebula (M8) at the lower right side and just above it is the Trifid Nebula (M20).  To make these images even better tracking the stars with a telescope or motorize mount would allow for longer exposure times at lower iso's which would create an even better image.   I'll save that for next time.   I hope you enjoyed this walk through the stars. 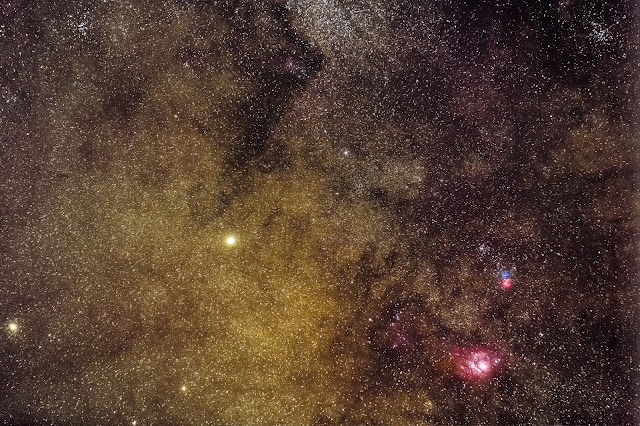 To see more of my work feel free to add me on Facebook or follow me on Instagram
Designed for you by Ruth Hiebert at 11:56:00 AM