Warning!
This post has photo overload.
About the middle of June,I had the privilege of going along with some friends on an excursion to photograph White Pelicans. We had a great time.
Along the way we made a few stops to see the sights.

This old tree root was one that caught my attention.It is lying at the edge of a rivers it may have floated there from somewhere else.I really don't know, but I liked it's root remnants that were still there. 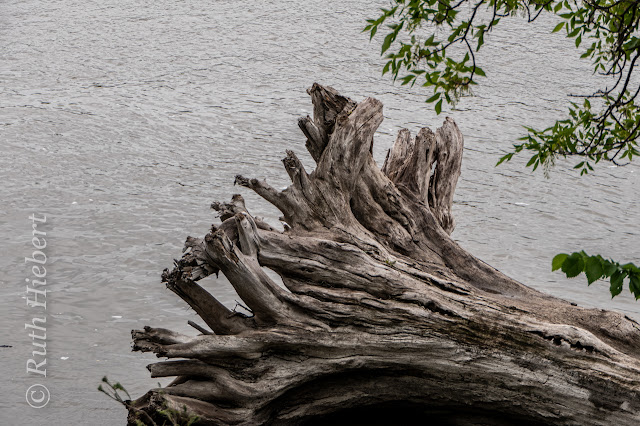 I did say we went to see Pelicans, and Pelicans we did see, lots of them.
Here a squadron was coming in for a landing. 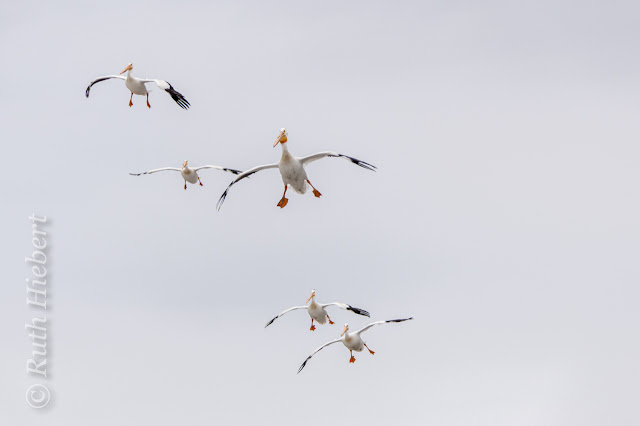 Getting ready for touch down. 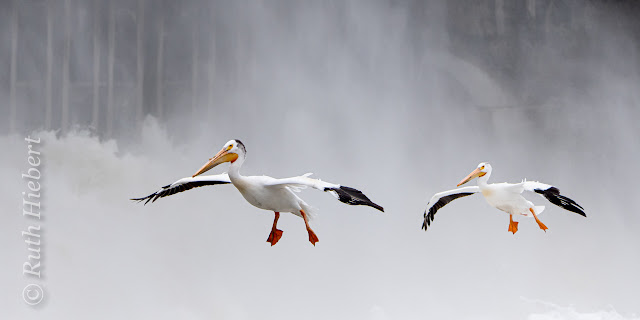 And touch down is happening. Looks rather close to the others, but I never saw any collisions, so all is well. 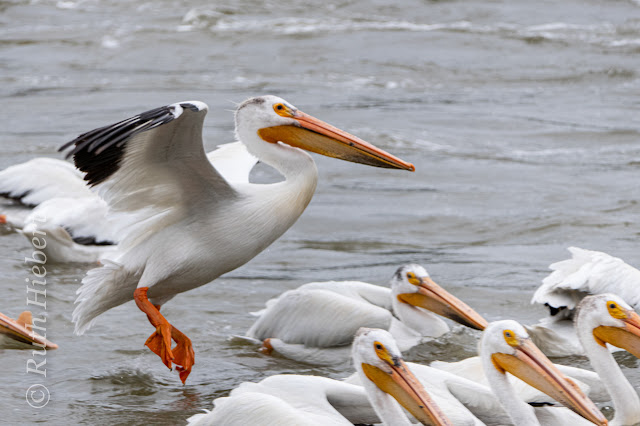 These birds, so graceful in the sky, look rather goofy as they come in for a landing. 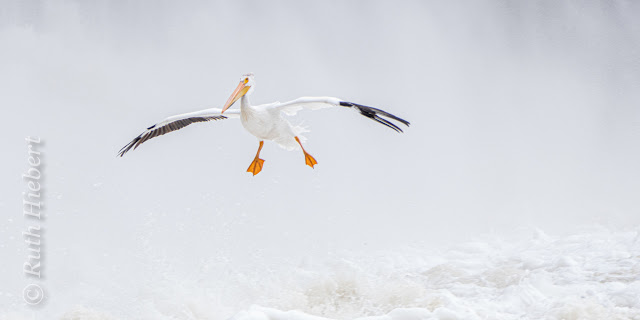 All the mist you saw in the background of previous pictures is explained by this picture.These are the locks at Lockport, Manitoba. There must be good fishing for the birds and even the humans at this spot.Down river, were lots of folks in boats hoping to catch a fish. 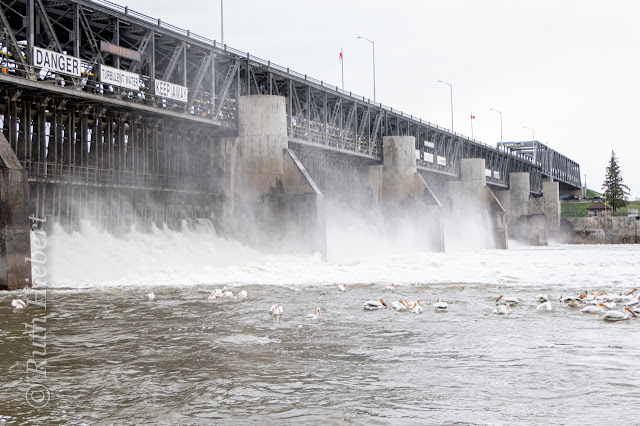 It wasn't just the Pelicans who came to fish.This Osprey was hunting as well. 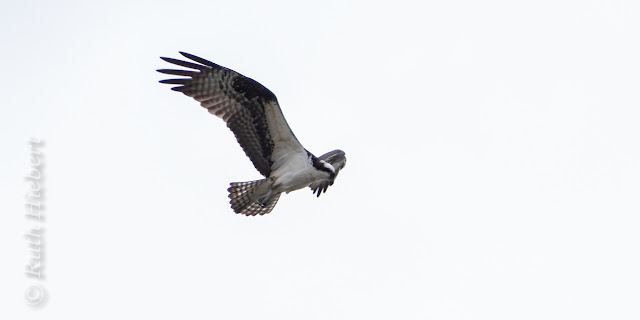 It almost looks like he's getting ready to dive into the water. 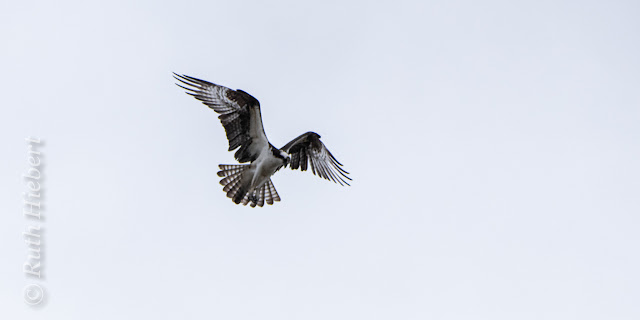 I think these birds are so beautiful.I only wish he had been flying into the picture, but the action is pretty fast, so I will be content with this. 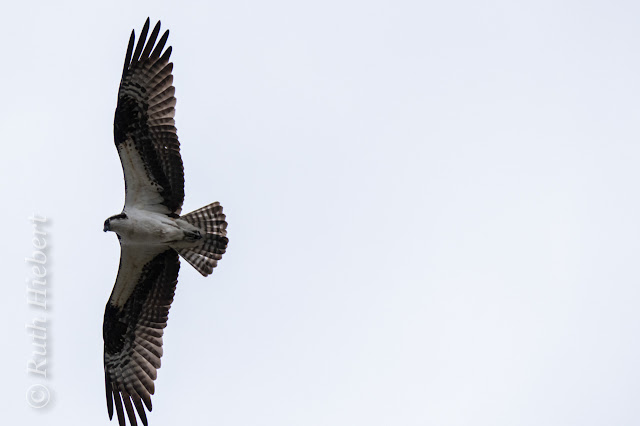 Yes, he was successful in getting a fish as well. 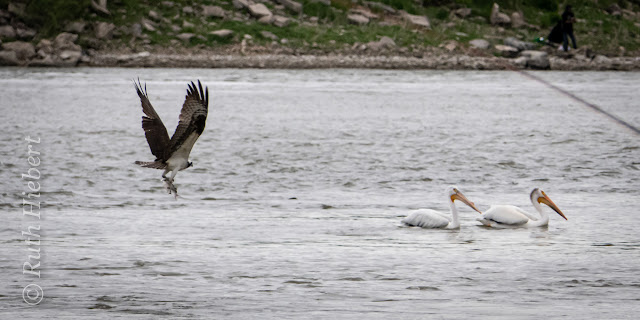 A trio of Pelicans soars into view. Perfect formation flying. 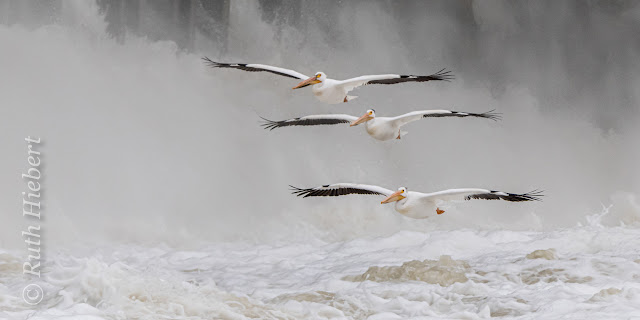 Something To Think About:
Look at the birds of the air, that they do not sow, nor reap norgather into barns, and yet your heavenly Father feeds them. Are you not worth much more than they?
Matthew 6:26
Designed for you by Ruth Hiebert at 3:32:00 PM

Fantastic photos, Ruth! It looks like a great trip to the pelicans! And Osprey!

These are fabulous photos, Ruth....the pelicans look so funny with their legs and feet all spread out...lol!

Outstanding photos, Ruth. Fascinating for me to see these birds. I also love the Bible verse.
I hope you have a pleasant weekend.

Wow! I love these pics, Ruth. You really captured some wonderful shots! Birds in flight and/or especially landing have always fascinated me. I usually watch seagulls, but these pelicans in flight are fantastic. Thanks so much for sharing them.

I love number 2 pelican pic, the way their feet hang down showing off the webs and that last one brings back fond memories of vacations on Ormond Beach, we sat for hours watching the pelicans in that flight pattern riding the updraft from the tall condo buildings. they were not white but brown pelicans. we do have white here but not very many, nothing like this flock.

You KNOW how I love birds!! What a special treat this photo blog is. And I DO love the tree root on the river bank.

Delightful shots Ruth. You captured action so beautifully.
I love the tree root too. I tend to take pictures of things like that all the time.
Thanks for taking me on your photo journey...love it.

These are all gorgeous photos, but I don’t understand how you could possibly think this post suffers from photo overload. We can never see enough of your work!

Oh, Ruth....these are wonderful. You could never post too many photos. Specially of pelicans. I have totally enjoyed these.

they are so cute and a little funny looking those pelicans, even in flight!!

the osprey is awesome, especially the 2nd one!!

too many pictures?? what must you think of my posts?? i always share more that this - i am so happy you shared them all!!

Marvellous images Ruth They are so funny when they are coming in to land. H\ve a good week

Lovely photos. I like the most is the 3 birds flying together.

The pelican shots made me smile, they do look goofy.

i love the way they are landing ...that just brings joy to me ... i think we all have goofy moments. great shots!! so fun. thanks for sharing. have a super great week!! humid here. hope your weather is cooler. ( ;